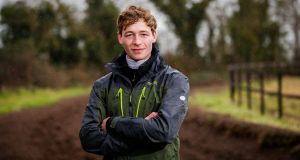 David Mullins:he make his comeback in time for the start of the Cheltenham festival in just over a fortnight. Photograph: Ryan Byrne/Inpho

Grand National-winning jockey David Mullins returns to action this weekend almost four months after suffering a spinal fracture.Mullins fractured his T12 vertebrae in a fall at Thurles in October, which saw him taken from the track by air-ambulance.

The 23-year-old, who famously won the 2016 Aintree Grand National on Rule The World, was lucky to escape life-changing injuries in the incident. A long period of rehabilitation sees him make his comeback in time for the start of the Cheltenham festival in just over a fortnight.

“I can’t wait now, and just hope it goes well. Even if you’re out for two weeks, four weeks or four months, you always feel like you’re going to be forgotten about when you come back. You start again from scratch really.

“I’ve no real winners ridden this season, no good winners anyway. I’ve three good rides in three good races, so hopefully I can get a winner or something close to it,” he said on Friday.

Mullins has two rides for his father Tom at Fairyhouse on Saturday, and another on Chavi Artist in the featured €50,000 Paddy Power Novice Handicap Chase at Naas a day later.

Prior to his fall he had ridden 11 winners from 84 rides this season.

Mullins came within a head of landing more Grand National glory in 2018 when Pleasant Company just failed to overhaul Tiger Roll at Aintree.

Pleasant Company is one of four Willie Mullins runners in the Grade Three Bobbyjo Chase on Saturday, with Mark Walsh coming in for the ride. Pleasant Company won the race in 2017, but Paul Townend has opted to team up with the 2018 winner Bellshill, who failed to cut much ice behind Delta Work in the Irish Gold Cup last time.

In a race that is traditionally a significant trial for the Aintree National – and which this time can be boiled down to Mullins v Gigginstown – it is Alpha Des Obeaux who emerges on top based on official ratings.

General odds of 33-1 for April’s National are likely to be cut if Davy Russell’s mount emerges on top.

Battle Of Wills is as low as 16-1 for Cheltenham’s Triumph Hurdle on the back of an impressive winning debut over flights at Naas.

Fujimoto Flyer is a 12-1 shot for the Triumph, and Emmet Mullins sends the filly to Kempton on Saturday for the Grade Two Adonis Hurdle.

It will be Fujimoto Flyer’s first run since easily winning a Listed race at Auteuil in September, and a first start in the colours of her new owners Simon Munir and Isaac Souede. Their jockey Daryl Jacob rides the Japanese-bred horse for the first time in a nine-runner contest won in the past by stars such as Zarkandar and Binocular.