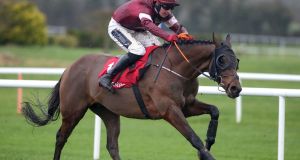 Tiger Roll is among 89 remaining contenders for the Randox Health Grand National at Aintree on April 4th.

History awaits Gordon Elliott’s remarkable 10-year-old, who is due to complete his preparations at the Cheltenham Festival when he attempts to win there for a fifth time in all.

No horse has ever claimed the Aintree spectacular in three successive years, but Tiger Roll is currently favourite to do just that.

Last year’s runner-up Magic Of Light is on course despite finishing well behind Tiger Roll recently in the Boyne Hurdle. Prior to that she had been in fine form, winning at Newbury and Ascot.

Her trainer Jessica Harrington said: “Magic Of Light is in good form. She wasn’t as slick at her hurdles in Navan, but I think the ground was just too heavy for her.

“The Mares’ Hurdle at Cheltenham was an option, but the race looks very competitive – she would have been taking on two talented mares in Benie Des Dieux and Honeysuckle if they run. With that in mind, she will go straight to Aintree.

“She has a nice weight for Aintree and we are looking forward to taking her back there.”

Stablemate Jett is also in the mix, having run well in top company the last twice.

“Jett is our other contender for the Grand National and the plan would be to run him, provided the ground is suitable,” said Harrington.

“He prefers better ground to testing conditions, but he has run some fine races in defeat this season.

“I have been delighted with him and think there is plenty more to come from him.

“He stays very well and is a good jumper and has plenty of tactical speed.”

Tiger Roll’s stablemate Delta Work, a strong fancy for the Gold Cup next month, was one of 16 horses taken out, alongside Chris’s Dream, Missed Approach, the injured Native River and Noble Endeavor.

Those still outside the top 40 include Give Me A Copper, Takingrisks and Le Breuil (61). The next scratching stage is on St Patrick’s Day.