Unbeatable, unbackable: What next for Faugheen the great?

Now 12-years-old and nearing the end, there are three ways this great horse could go 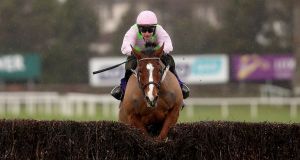 It could very well be that it’s already over for Faugheen and nobody knows it yet. At some point over the next seven days, Willie Mullins and Rich Ricci will have the conversation they’ve been putting off since the Dublin Racing Festival. To go to Cheltenham or not, to keep his swansong for Easter at Fairyhouse or to pull stumps now and declare a career. Ask anyone in and around the situation and they will swear that all options are live runners.

For followers of the horse, assuming the brace position has long since been the only course of action. Nothing Faugheen does should come as a surprise at this point and yet even now, at five to midnight, there’s arguably no other horse in training this season that can match his ability to shock.

The story of Faugheen is anything but a linear one, after all. It has a beginning, a middle and an end alright, just not in that order. This bit, right now, his novice chasing season – that was supposed to be the middle.

Six years ago, after he won the Neptune (now Ballymore) Novices’ Hurdle at Cheltenham, the future Mullins and Ricci had sketched out had him finishing up his hurdling career at Punchestown and starting off novice chasing the following winter. But the race he was supposed to run at Punchestown got changed - stablemate Vautour failed a fitness test for the two-mile Tuesday race so Faugheen ran in it instead and won by 12 lengths.

Come the following season, Vautour was gone novice chasing and Faugheen ended up leading home a 1-2-3 for Mullins in the Champion Hurdle. His chasing career would have to wait. And wait. And wait.

“It’s gas the way things work out,” says Joe Chambers, Ricci’s racing manager. “Faugheen’s story is laced with so many what-ifs and so many unintended consequences. He was supposed to go novice chasing but he went hurdling instead. Even if you go back to the start, when we bought him, there was another horse we bought the same week called Clondaw Court that nobody has really ever heard of. But he was a savage animal, an absolutely savage animal. You never know how these things will turn out.”

Clondaw Court won a point-to-point by 15 lengths in Largy, Co Antrim on Saturday, April 21st, 2012. Faugheen won his by eight lengths the following Sunday in Ballysteen, Co Limerick. Ricci was starting to up his investment in horses significantly right around then and would add Vautour, Annie Power and Douvan among others, all over the next 18 months. Four of the five went on to be Cheltenham heroes. Clondaw Court was the other one.

In fact, Clondaw Court ended up having only five runs before injury cut his career short. He won four of them, all at heavy odds-on, an indication of what they thought of him. But he ended up amassing only a paltry €29,400 in his career and after finishing sixth of seven in the 2015 Hatton’s Grace, was never seen again.

All of which is only worth bringing up here as a small parable of cards falling and cookies crumbling. Faugheen was injured earlier than Clondaw Court and took longer to reach the racecourse. He has missed the best part of three full seasons through injury here and there and hasn’t won a race at Cheltenham since 2015. It would have taken very little to imagine his career and that of Clondaw Court switching places.

Instead, he’s one of only a dozen or so Irish National Hunt horses to have gathered up more than €1m in prizemoney in the span of his career. Only the likes of Hurricane Fly, Un De Sceaux, Tiger Roll, Sizing Europe and Beef Or Salmon have won more than him. Iron horses. Cult Heroes.

Faugheen sits comfortably among them. Not just admired as he was in the Faugheen The Machine days but loved, fiercely and without thought. Anyone who was at Limerick over Christmas or Leopardstown at the start of the month could see it – the loss of all reason, the betslip-proof enjoyment only the occasional horse can bring.

This is different to how it was. In the beginning, he won. Nothing else. Just won. No mistakes, no vulnerabilities, no hiccups. Well one, but he put it right almost immediately.

Between his bumper in Punchestown in May 2013 and his Irish Champion Hurdle win in Leopardstown in January 2016, Faugheen’s record was Ran 13, Won 12, Lost 1. His only defeat came by half a length to stablemate Nichols Canyon in November 2015, duly rectified in Leopardstown a couple of months later. He was untouchable – and therefore generally unbackable.

“I would say that day in Leopardstown was the day he put up his biggest performance over hurdles,” says Chambers. “He made a mistake at the last and still won, with Artic Fire 12 lengths behind and Nichols Canyon another 15 or so.

“But he didn’t run from that day until the Morgiana in November 2017. He had almost two years off the track. Willie had him recuperating, trying to rehab him, trying to get him back to full fitness. But every time we brought him back he’d kind of fall apart again. You’re trying to get him right, build him up, keep him right but he never quite made it back. He was very close a few times but we never quite got him back.”

Those years are what explain these years. Tiger Roll is the best-known jumps horse in training but he needed to win back-to-back Grand Nationals to achieve that status. Faugheen runs him close because everyone’s a sucker for a comeback.

“I got a call that night from Patrick O’Callaghan, the manager of Limerick racecourse,” says Chambers. “They had over 14,000 through the gate that day, the first time they had more than Leopardstown on Stephen’s Day I’d say ever. He was very thankful for us bringing the horse down and he said, ‘I stood in the stand as Faugheen and Samcro turned for home and the crowd were going nuts and I said to myself that whatever happens, we’ve done it right – it’s the first time we’ve had senior hurling at Limerick Racecourse.’

“I think if you’re looking to explain his popularity, it’s the fact that he has had those setbacks over the years. In his early days, he just turned up and won. But then over the years he had a fall behind Apple’s Jade, he was pulled up one Christmas, he was off the track for a couple of years, all the what-are-ye-doing-still-racing-him stuff, the drama of Aintree last year when we had PETA and all sorts on our back.

“To come through all that and then for Willie to have the balls to go, ‘I’ve always wanted to send him novice chasing so let’s do it.’ That’s what has led to this point. Nobody could plan for the reception he got at Leopardstown. There were people hanging off balconies at the back of the stands, jumping up on wheelie bins and picnic tables and everything else to get a look. Nobody could imagine something like that would be possible – but that tells you the genius of WP Mullins.”

This is, essentially, unchartered territory for a horse his age. The oldest winner of a novice chase at Cheltenham was an 11-year-old back in the 1940s. The Marsh Chase, which is the race Faugheen will race in if he does go, has only been run for a decade and all its winners have been either six or seven. It isn’t that 12-year-olds can’t win these races, it’s that they never try, 99.9 per cent of the breed having long since moved on from novice company by the time they reach Faugheen’s stage in life.

In fact, Faugheen’s singular career is the only kind where this could have been possible. One where his brilliance as a hurdler kept him over the smaller obstacles through his middle years and one where a raft of injuries and setbacks have left him lightly-enough raced to still be going into his early teens. You would never plan a horse’s career to follow this course. Yet here they are, mulling over one last decision on how to drop the curtain.

“It’ll be a gut-instinct thing between Willie and Rich,” says Chambers. “I would say there’ll be a fair amount of emotion involved but I don’t know what way they’ll go. I’m sure they’re not sure themselves yet.”

Nothing becomes Faugheen’s career like the ending of it, then. Captivating to the last.