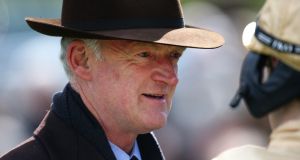 Willie Mullins will bid for a second ‘Leger’ success by saddling Renneti for Sunday’s €350,000 Prix Royal Oak at Saint-Cloud.

The champion jumps trainer has engaged French champion jockey Pierre-Charles Boudot for Renneti, one of eight horses taking on the hot favourite Vazirabad in the Group One highlight.

Vazirabad is chasing a third success in a row in what is considered the French equivalent of the St Leger.

Renneti won at Naas last month but faces an uphill task in a race that also contains the Andrew Balding-trained Montaly.

Yeats was the last Irish-trained horse to win the Royal Oak in 2008. Sunday’s race run over almost two miles is due off at 3.25pm Irish-time.

Mullins famously won the Irish St Leger last year with Wicklow Brave and that horse has another top-flight target at 6.30 on Saturday morning when lining up alongside the Aidan O’Brien trained Johannes Vermeer in the Caulfield Cup in Melbourne.

Sunday’s Leopardstown highlight is the Group Three Killavullan Stakes for which Aidan O’Brien saddles one colt and two fillies.

Considering fillies have won this in three of the last five years the Ballydyoyle representation could prove significant although Donnacha O’Brien who rode both Bye Bye Baby and Dramatically to dramatically win last time is on board the colt, Kenya.

Given the rate of improvement O’Brien’s juveniles can find, for experience Kenya should be a leading player but in strict form terms he will have to find plenty to put it up to McMunigal.

The Ger Lyons gelding was impressive in beating Found’s brother James Cook on his Naas debut last month after which the trainer anticipated plenty more to come next year. The fact McMunigal even lines up at all could ultimately prove to be the most significant element of all to this race.

James Cook himself is likely to be a hotpot in an earlier maiden given the promise he showed at Naas while Cannonball could be the best Trigo Stakes option if ground conditions get very testing.