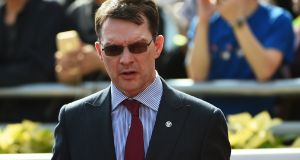 Should Aidan O’Brien emerge from Ascot’s ‘Champions Day’ without at least one of the four Group One races up for grabs in the British season’s finale it will hardly be an accurate reflection of the overall 2017 campaign.

O’Brien is going to be crowned Britain’s top trainer for a sixth time after the QIPCO Champion Stakes on Saturday. John Gosden’s lot – as the last home winner of the trainers’ championship – is to present the prize, a twist O’Brien’s rival could probably do without.

The Irishman’s dominance has been so extensive in 2017 that only Gosden’s superstar filly Enable prevented a Ballydoyle clean sweep of the British and Irish classics.

O’Brien’s prizemoney haul in Britain alone stands at over €8 million, over €3 million clear of Gosden who on Saturday saddles both the Champion Stakes favourite Cracksman and Journey who defends her Fillies & Mares title.

Sheikh Mohammed’s Godolphin team are responsible for the two other likely Group One favourites Harry Angel and Ribchester.

So since ‘British Champions Day’ hasn’t proved particularly rewarding in the past for Ireland’s perennial champion trainer – and he has famously drawn a blank in the Champion Stakes – O’Brien’s principal competition will feel they have the potential to secure lucrative late consolation.

In overall terms however such an outcome would be something of a blip.

The convoluted parameters of the season ‘proper’ in Britain means next week’s Racing Post Trophy is irrelevant in championship terms yet it is almost touching ‘banker’ status in what’s long odds-on to ultimately prove a world-record haul of Group One victories for O’Brien this year.

He could equal Bobby Frankel’s tally of 25 in a year when Johannes Vermeer lines up at 6.30 on Saturday morning for the Caulfield Cup in Melbourne. And even if he doesn’t win, one firm offer just 9-4 about O’Brien breaking the record at Ascot.

O’Brien has also yet to saddle a winner of either the Champion Sprint or the Filly & Mare since they moved to top-flight status which trends-wise isn’t encouraging. Nor is how his two big three-year-old stars Churchill and Caravaggio come to what may be their final career starts with something to prove.

With soft ground anticipated in a weather outlook promising more rain and high winds, conditions aren’t perfect for Highland Reel in the Champion Stakes, nor for the chances of Hydrangea’s stamina lasting out in her first try at a mile and a half.

Overall it means bookmakers rate Order Of St George as the best Ballydoyle chance of the day but since that’s in the Long Distance Cup it doesn’t figure in Group One terms.

Churchill leads a Ballydoyle trio into the Queen Elizabeth II Stakes that has provided the most productive of these ‘Champions Day’ races for O’Brien in the past.

The dual-Guineas winner steps back to a mile after an odds-on Irish Champion Stakes defeat that leaves him with plenty to prove against a proven top-flight older horse such as Ribchester.

Caravaggio and Harry Angel clash for a third time in the big sprint and the Ballydoyle runner too has a reputation to rehabilitate although at least he goes to Ascot on the back of a confidence-restoring victory in last month’s Flying Five.

O’Brien isn’t the only notable absentee from the Champion Stakes roll-of-honour. Frankie Dettori has yet to land the ten furlong highlight too although conditions could swing decisively his way with Cracksman who acts well on the soft. The same can’t definitely be said about much of his principal opposition. The French outsider Recoletos is another who will relish the ground.

Cracksman’s stable companion Journey has a history of coming to her best in the autumn and can prove the point again by reversing Prix Vermeille form with Bateel.