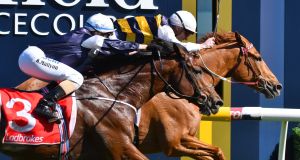 The Caulfield Cup is the sole remaining leg of Australian racing’s prestigious ‘Spring Treble’ yet to be won by an Irish-trained horse but both Aidan O’Brien and Willie Mullins are set to try and fill that gap on Saturday.

Both of Ireland’s champion trainers are targeting the $3 million mile-and-a -half highlight which will be run early Saturday morning Irish-time.

The Group One handicap is O’Brien’s next opportunity to try and equal Bobby Frankel’s world record tally of 25 Group/Grade One victories in a calendar year and Johannes Vermeer has been supported into as low 6-1 second-favourite on the back of his Australian debut at the track last weekend.

Johannes Vermeer just failed to overhaul Gailo Chop in the Ladbrokes Stakes and hopes appear high in the Ballydoyle camp that the colt can step up on that performance despite there being just a week between races.

“It’s only a problem if you think he hasn’t come out of his races so well,” said O’Brien’s representative, TJ Comerford in Melbourne.

“I don’t think he has to improve. I think if he runs like he did the last time, I think that’s good enough because he wasn’t knocked about. He ran very well on Saturday but we thought as much because he’s been absolutely flying since he got here.

“He came out of the race so well it was actually like a piece of work for him. I don’t think we need to do a whole lot more with him,” he added.

Local jockey Ben Melham is set to take over from Katelyn Mallyon on Johannes Vermeer but the Hong Kong champion Joao Moreira will be aboard Mullins’s 2016 Irish Leger hero Wicklow Brave on Saturday.

Mullins’s Riven Light was operated on after fracturing a joint in his leg when five places behind Johannes Vermeer at the weekend and the champion jumps trainer will hope for better fortune when Wicklow Brave turns out.

“He looks good and appears to be in really good form. It will be a competitive race but I’m sure he’s up to the challenge,” said former jockey David Casey who is overseeing the four Mullins horses sent to Melbourne for their Spring season.

Both Max Dynamite and Thomas Hobson are in contention to run in the Melbourne Cup on the first Tuesday of next month.

Dermot Weld famously won ‘the race that stops a nation’ in 1993 with Vintage Crop, and also in 2002 with Media Puzzle, while Aidan O’Brien landed the 2014 Cox Plate with Adelaide.

Four overseas-trained horses have won the Caulfield Cup, beginning with the English horse Taufan’s Melody in 1998. Godolphin’s All The Good scored in 2008 while Dunaden won for France in 2012. The Japanese runner Admire Rakti won three years ago.

Along with the Melbourne Cup and the Cox Plate, the Caulfield Cup is part of Australian racing’s Spring Treble. Just one horse, Rising Fast in 1954, has ever completed the hat-trick in one year. Might And Power won the three between 1997 and 1998.

1 Monica Seles: The warrior queen who could have been the best ever
2 Séamus Power rockets into share of clubhouse lead in Detroit
3 Welcome to Iten in Kenya – home of champions and cheats
4 Andrew Porter: Introducing contactless contact sessions
5 Red Bull poised to protest over Mercedes’ new steering system
Real news has value SUBSCRIBE