Faugheen on course to make his return in Morgiana Hurdle 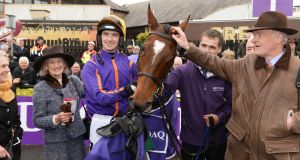 Willie Mullins has confirmed Faugheen remains on course to return to action in next month’s Morgiana Hurdle at Punchestown.

However the champion jumps trainer’s immediate focus is on the flat at the other side of the world where he hopes Joao Moreira’s reputation as Hong Kong racing’s ‘Magic Man’ can help Wicklow Brave overcome a wide draw in Saturday morning’s Caulfield Cup.

Whereas Aidan O’Brien’s Johannes Vermeer moved towards the top of the betting for the $3.15 million event after getting a plum draw in stall two of the 17 runners, Wicklow Brave will start from stall 16.

Five of the last eight Caulfied Cup winners have come from a double-digit draw but Wicklow Brave will have only the ex-Ballydoyle runner, Sir Isaac Newton, outside him.

“I’ll have to have a word with David Casey who pulled that draw out!” joked Mullins on Tuesday. “Wicklow Brave actually worked very well this morning but that outside draw will test him.”

“He’s had two screws put in and the prognosis is good. It will take time but he should be back next season,” said Mullins who is pleased with how his two Melbourne Cup hopefuls, Thomas Hobson and the 2015 runner-up Max Dynamite, are doing at their temporary base.

“Both travelled very well and lost very little weight which is a great sign. Thomas is in good shape, fit and raring to go. So is Max although he will probably need a little more work. We’ll see how that goes before thinking about a jockey for him,” Mullins added.

Moreira has already been booked to ride Thomas Hobson in ‘the race that stops a nation’ which is run on the first Tuesday in November.

Johannes Vermeer will be ridden on Saturday by Ben Melham who told local media: “He backs up well, has very good form and now you can add a favourable draw. He has good change-up speed so he’s an ideal Caulfield Cup horse.”

Back home in November, Willie Mullins hopes to welcome back the former Champion Hurdle winner Faugheen who hasn’t been seen in action in 21 months.

The 2015 Cheltenham hero suffered a stress fracture that prevented him running at all last season but Mullins indicated Faugheen is on course for his eagerly anticipated return.

“It will probably be the Morgiana. That’s the point we’re aiming to start him off in. We had him fairly fit before he went out so I think he will be fairly forward by the time the Morgiana comes around,” he said.

Mullins said it was too early to formulate plans for when other star National Hunt names might return to action, including Yorkhill who features in betting lists across a spectrum of championship races, among them the Cheltenham Gold Cup and the Champion Hurdle.

“We haven’t even started schooling him yet so whether he goes over hurdles or fences I don’t know yet. But he is in great form,” he added.

In other news, the impressive recent record of fillies in the Group Three Killavullan Stakes could  continue at Leopardstown this Sunday.

Half a dozen of the 15 entries left in the race are fillies and four of them come from Aidan O’Brien’s Ballydoyle team. They include the Listed winner Bye Bye Baby and Sunday’s impressive Naas maiden scorer, Dramatically.

Dermot Weld has left in the Moyglare-owned filly Chiara Luna who is on target to try and emulate Making Light who won the race a year ago. Weld also won the Killavullan with Big Break in 2012 while Steip Amach beat the colts in 2014.

One colt absent from the entries is Warm The Voice who is set to continue his racing career in Hong Kong. The triple winner finished his campaign in Ireland when third to the Derby favourite Saxon Warrior in last month’s Beresford Stakes.

1 CVC cuts Six Nations offer by half to €165m as talks continue on new deal
2 Could lack of sex force players to break the NBA’s bubble?
3 Jack Charlton era made GAA sit up and realise its greatest strength
4 Game Changers: Living beyond fear puts Alex Honnold above all others
5 Georgia and Fiji in line to join Six Nations sides in eight-team tournament
Real news has value SUBSCRIBE