Man dies after incident in stable yard at Kempton racecourse

It is believed that the man, who was in his 50s, may have been kicked by a horse 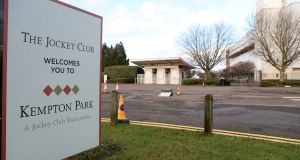 A man in his 50s has died in as yet unexplained circumstances following an incident in the stable yard at Kempton’s all-weather fixture on Saturday evening, Surrey Police said. Photo: Adam Davy/PA Wire.

A groom who died at Kempton Park on Saturday night has been named by his employer as Ken Dooley, trainer Amanda Perrett said in a statement.

Dooley, who was attached to Perrett’s yard in West Sussex for seven years, suffered fatal injuries following an incident in the stable yard at Kempton’s all-weather fixture.

Perrett described Dooley as “hugely enthusiastic and dedicated to his horses”.

She said: “It is with huge sadness that I can confirm we lost our friend and colleague Ken Dooley after an incident in the stable yard at Kempton last night.

“Ken had been with us for seven years and was a very special member of our close-knit family business at Coombelands.

“He was an excellent employee, very experienced with racehorses having worked all of his life with them as a jockey, trainer and jockey coach around the world. He was always first into work in the morning, hugely enthusiastic and dedicated to his horses and a very much valued and integral member of our team.

“I would like to thank my staff, Brian Clifford, the stable and racecourse staff at Kempton, Hugo Palmer’s travelling head lad, Dr Lucy Free and the ambulance service who we so quickly there to help Ken.

“Our thoughts are with his family at this very sad time.”

Surrey Police said an investigation is under way into the incident that prompted Kempton clerk of the course Barney Clifford to abandon the fixture with two races on the card remaining.

A force spokesperson said: ”Surrey Police were called to Kempton Park racecourse in Sunbury-on-Thames following a report of a sudden death around 9.20pm on Saturday, October 14.

“A man in his 50s was sadly pronounced dead at the scene.

“The death is currently being treated as unexplained and inquiries remain ongoing.”

Dooley’s death comes four months after stalls handler Stephen Yarborough died at Haydock when he was run over by mobile starting stalls before a race.

He said in a statement: “I am sure that I speak for everyone at the BHA and everyone in British horseracing this morning when I state that we are truly devastated about the events which unfolded at Kempton Park last night.

“Our sympathies go to the family, friends and colleagues of the individual who has lost his life, and the entire industry will join in mourning over this tragedy.”

Newmarket trainer Robert Cowell said it was “an awful tragedy”.

He tweeted: “The grooms/riders are the life of our industry. Respect and condolences. RIP.”

Fellow trainer Richard Hannon tweeted: “Our thoughts and prayers go out to the lad killed at Kempton last night and all his family and friends and also with Amanda Perrett RIP.”

Jockey Martin Dwyer is closely attached to the Perrett yard and was in action at Kempton.

He told Racing UK: “There was a very sombre mood and nobody really knew what was going on, and then we found out. As I was leaving there were blue lights everywhere and it was a bit of a shock.

“Unfortunately, horses do kick out and I believe that’s what happened. They have metal shoes on and if you get a kick from a horse it can be very serious.

“Horses don’t mean to do it. If they feel someone is too close or something they do kick out, but fortunately it is very rare. It is very sad.”

Sunday’s two domestic meetings at Goodwood and Chepstow were due to stage a minute’s silence as a mark of respect.