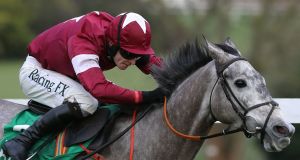 The return of racing at Punchestown on Wednesday indicates a changing of the seasons and Petit Mouchoir’s racecourse debut over fences will be eagerly anticipated.

Only four horses were rated superior to him over flights in Ireland last season and Michael O’Leary’s grey is already a 12-1 favourite with many firms for the Arkle at Cheltenham in March.

Petit Mouchoir lines up for a Beginners Chase and will be partnered for the first time by Davy Russell.

Rated 160 over flights after two top-flight wins last season – and a third in the Champion Hurdle at Cheltenham – Petit Mouchoir’s quality is unquestionable and that he was noted jumping particularly well when winning a point to point in 2015 will only heighten expectation.

Punchestown’s authorities report only “minimal damage” caused by Storm Ophelia on Monday with no problems anticipated ahead of racing on Wednesday and Thursday.

”We’re fine and credit to the staff who prepped as much as they could before the storm. We delayed setting up wings for fences and such so there’s been minimal damage and we’re good to go,” said spokesman, Richie Galway.

He also confirmed the John Shortt Legends charity race will take place at 1.20 before Thursday’s card.

Former riders including Charlie Swan and Conor O’Dwyer are due to take part in an event which aims to raise funds towards the building of a house for the family of the late jockey. Shortt died in February, aged 53, after a battle with cancer.

Ruby Walsh’s sole ride on Wednesday is for his father, Ted, who saddles Minnie Dahill, in the opening juvenile hurdle.

Although wet weather is anticipated for Thursday, dry conditions on Wednesday should help keep the going more suitable for the Down Royal winner who looked to subsequently get bogged down at Listowel.

Better ground can also work to the advantage of the Downpatrick winner William Du Berlais in the handicap chase where the in-form Donie McInerney uses a valuable claim.