Keane surges into control in the jockeys’ championship race 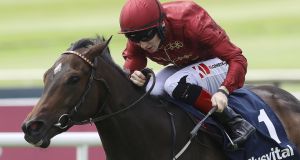 It’s simplistic to boil a season-long battle for the jockeys’ championship down to a single race but the split second it took for Colin Keane to get Elegant Pose’s nose in front of Pat Smullen on Making Light at Naas on Sunday had a decisive feel to it.

It was the middle leg of a 66-1 Naas hat-trick for Keane which stretched his lead over Smullen to seven (90-83)and confirmed the momentum behind the 23- year-old rider’s efforts to secure a first jockeys’ championship.

Smullen had one winner in response and all but conceded the title at the end of the day, declaring: “It’s all over – I just don’t have the ammunition.”

Ger Lyons also supplied Moonlight Bay to land the Birdcatcher Nursery and later Keane got the better of Smullen on board Mustajeer in the ten furlong handicap. However it was Elegant Pose’s victory in the Listed Garnet Stakes which had the air of a statement.

Making Light looked a likely winner for much of the straight and still held a lead in the dying strides. Keane however somehow conjured a run out of Elegant Pose to mug her on the line.

“I didn’t see that happening a furlong out. She’s some little titch,” said Lyons whose enthusiasm for Keane’s title challenge has been unwavering. “It’s been a good day at the office for all concerned.”

After Moonlight Bay’s victory, Lyons looked relieved and joked: “The sooner this is over the better!”

However he quickly added: “All jokes aside I think everybody is enjoying it. Colin seems to be thriving on it and is riding better than ever. We’ll be doing everything we can to keep him in front.

“Our horses are healthy and well, seconds are turning into first and you have to make the most of it when that happens. So let’s just get it done.”

Smullen has a significant edge on his rival in prizemoney terms this season and added to it when Dermot Weld’s 9-4 favourite Yulong Gold Fairy ran away with the lucrative Foran Auction Race Final.

The €8,000 purchase collected an almost €71,000 first prize for running six lengths clear of Quizical and Weld predicted she will be aimed at a classic trial next Spring.

Nevertheless the championship initiative appears like it is decisively swinging Keane’s way. A double at Cork on Saturday included a Listed success for Elegant Pose’s older brother Brendan Brackan while Smullen collected only a one -day ban for careless riding in the same race.

That suspension rules him out a Leopardstown meeting on Saturday week. Eziyra’s likely participation on Champions Day at Ascot this Saturday means missing out on another vital fixture. It was little surprise then that Keane is trading at 1-20 to ultimately deny Smullen a tenth title.

Keane had actually been beaten on the first two favourites before landing the Birdcatcher Nursery on the 9-2 winner Moonlight Bay who was a neck too good for the 11-4 favourite, Guessthebill.