Laurens holds off September in thrilling finish at Newmarket 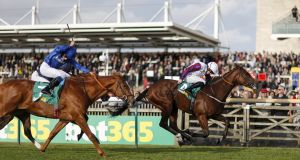 Laurens was called the winner after a thrilling climax to the bet365 Fillies’ Mile at Newmarket.

Having won the May Hill Stakes at Doncaster last month, Karl Burke’s filly was sent off at 10-1 stepped up the highest level and raced on the speed throughout.

With the rail to help, PJ McDonald kicked for home inside the final two furlongs and after shaking off stablemate Ellthea and Magic Lily, looked set to win decisively.

However, September was travelling strongly in behind and once the gap came she fairly flew home to virtually join Laurens on the line.

After a nervous wait, the judge confirmed Laurens had held on by a nose, denying September’s trainer Aidan O’Brien his 24th Group One success of the season.

Magic Lily was not far away in third, with O’Brien-trained 15-8 favourite Magical fourth.

McDonald, who rode the winner of the Scottish Grand National during his days as a National Hunt jockey, was claiming his first ever Group One success on the Flat.

He told ITV Racing: “I honestly can’t believe it. I’m 35 years of age now and the relief when that number got called out was amazing. If I never do anything else in my career, I’ve ridden a Group One winner.

“I didn’t have a clue whether we’d won. I was praying we had it, but I didn’t know.

“All the credit goes to Lucy (Burke, trainer’s daughter). She rides this filly every day and has done since she came in.

“It’s a massive team effort, everyone has played their part.

Earleir dual Group One winner Limato belatedly opened his account for the campaign in the Godolphin Stud And Stable Staff Awards Challenge Stakes.

Henry Candy’s stable star won the July Cup and the Prix de la Foret in 2016 and although he had previously failed to add to his tally of eight career wins this term, he had been placed in the Diamond Jubilee at Royal Ascot and when defending his July Cup crown before finishing a close-up fourth in the Lennox Stakes at Goodwood.

With ground conditions in his favour, the five-year-old was the 6-4 favourite to show his true colours on the Rowley Mile and was given a nice lead into the race by Massaat towards the stands rail.

Limato took over approaching the final furlong under Harry Bentley and readily kicked clear of his rivals for an impressive three-and-a-half-length victory.

Massaat (11-2) was a clear second, with the admirable veteran Gordon Lord Byron third at 66-1.