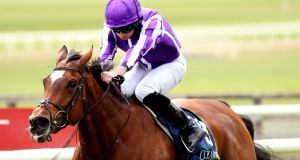 Ryan Moore onboard Magical at the Curragh. Magical is tipped to triumph in the Irish Champion Stakes. Photograph: Peter Mooney/Inpho

Aidan O’Brien can call on both a Derby and a Guineas winner for Saturday’s QIPCO Irish Champion Stakes but it is the older filly Magical who bookmakers reckon is the one to beat.

She has been installed a general 7-4 favourite for the €1.25 million highlight of Irish Champions Weekend, an event O’Brien has pledged to attack in strength.

The depth of that challenge is indicated by the champion trainer having 34 entries in total for the six Group One races that are spread around Leopardstown and the Curragh after Tuesday’s forfeit stage.

They include Kew Gardens in Sunday’s Comer Group Irish St Leger as well as Armory, one of 10 Ballydoyle entries among the 15 left in the Goffs Vincent O’Brien National Stakes on the same programme.

That Curragh card will feature the Pat Smullen Champions Race For Cancer Trials Ireland where renowned former jockeys such as Ruby Walsh, AP McCoy and Johnny Murtagh, come out of retirement for a mile race due off at 4.50.

It adds an extra ingredient to the sixth edition of Irish flat racing’s two-day showpiece which this year is worth €4.6 million in overall prizemoney.

The Champion Stakes is the richest race of all and features a first ever Japanese-trained runner in Ireland.

Deirdre won Goodwood’s Nassau Stakes on her last start and is joined by two cross-channel hopes in Headman and the Mark Johnston’s Elarqam who was supplemented on Tuesday at a cost of €75,000.

O’Brien has half a dozen of the 11 left in the race including the Epsom Derby hero Anthony Van Dyck and Magna Grecia who won the Newmarket 2,000 Guineas in the spring.

“Magna Grecia could run. His plan after the Irish Guineas had been the Juddmonte International which he didn’t run in, the Irish Champion and then back to a mile later in the season at Ascot,” the champion trainer said on Tuesday.

“It’s an unbelievable two days racing. We’re very lucky to have it and we want to run as many as we can,” he added.

Ryan Moore could be in Doncaster for the St Leger on Saturday which leaves O’Brien’s son Donnacha potentially on standby for Ballydoyle’s number one contenders in both the Champion and the Coolmore Matron Stakes.

Ireland’s reigning champion jockey twice rode Magical as a juvenile and can boast a 100 per cent record. She has won a pair of Group One prizes since although has had the bad luck to regularly come up against the world’s top-rated performer, Enable.

“Her form is right up there with the best in the world, bar Enable, and she looks to be going there with a big shout,” O’Brien jnr said.

“She’s an exceptional mare, probably up there with the best I’ve ridden. She’s just very unlucky to be in the same two years as Enable,” he added.

The O’Briens numerically dominate the 10 Matron Stakes entries. Half a dozen of them, including the dual-Guineas heroine Hermosa, are from Ballydoyle while Joseph O’Brien has both Red Tea and the Pretty Polly winner Iridessa.

However it is last year’s winner Laurens who tops the betting at 7-4 while John Oxx has left it in Skitter Scatter.

The international element to the weekend action could be added to in Sunday’s Leger after a pair of German horses were left in the race.

Both Moonshiner and Adler ran behind Raa Atoll in a German Group Two races earlier this year. Raa Atoll, who is owned and trained by the Leger sponsor, Luke Comer, is also among 18 left in the big race.