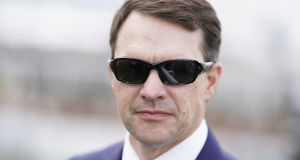 Aidan O’Brien is set to pursue in force a seventh William Hill St Leger success at Doncaster this Saturday. Ireland’s champion trainer has six of the 11 hopefuls left in the world’s oldest classic, headed by Sir Dragonet and Il Paradiso, after Monday’s forfeit stage.

The Frankie Dettori-John Gosden team is outnumbered in comparison, although their sole hope, Logician, is a hot favourite to continue their hugely successful Group One season. The impressive Great Voltigeur winner is generally evens to repel the Ballydoyle challenge.

O’Brien is on a Leger hat-trick having won with Capri (2017) and Kew Gardens a year ago. Sir Dragonet is rated Logician’s biggest danger despite failing to fire on his return to action at the Curragh last month.

“He was just ready to start at the Curragh and he got a little bit tired, which he was entitled to do as I was being very careful and gentle with him.

“It was also the first time he’d run over that trip. He’d always been over a mile and a half. He’s not short of class and he’s not short of pace, so it will be interesting,” O’Brien said.

Early indications are that Ryan Moore could stick to Doncaster rather than riding on day one of “Irish champions weekend” at Leopardstown on Saturday.

The Foxrock fixture has brought its time forward to avoid a clash with the All-Ireland final replay, which rules out Moore taking in both the Leger and the QIPCO Irish Champion Stakes. That provides the prospect of a classic Dettori-Moore head-to-head up the long Doncaster straight, which John Gosden believes will play to Logician’s strengths.

“He has been in great form since York. He is a very relaxed character, and he has a lovely big long loping stride,” said the Englishman who is just ahead of O’Brien in the British trainer’s championship. “He [Logician] has come a long way in a short time. The nice long straight at Doncaster should suit him well.”