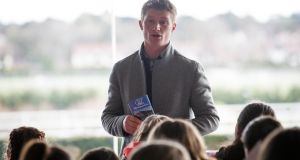 Denis Hogan: the Tipperary-based trainer was cleared of any blame but was however ordered to pay €1,000 towards the costs of the investigation. Photograph: Ryan Byrne/Inpho

Racing’s regulatory body has defended the timeline which could see the first horse in this country to test positive for anabolic steroids back in action by the end of March.

On Tuesday a referrals committee panel chaired by Justice Tony Hunt restricted the Denis Hogan-trained Turbine from being in training until January 31th of next year, and from running until March 31st, 2020.

They had heard how Turbine had twice tested positive for Nandrolone, an anabolic steroid, after two runs in May including following a win in Cork.

At the end of that month out of competition testing at Hogan’s Co Tipperary yard, which included the use of hair-testing for the first time, also resulted in a positive outcome for Nandrolone.

Hogan escaped any penalties after a vet who had Turbine in his care for a wind operation in January accepted responsibility for the horse being administered a substance containing the anabolic steroid by mistake.

An Irish Horseracing Regulatory Board spokesman has confirmed that British Horseracing Authority guidelines which outline a 14 month ‘stand-down’ period for such positive tests were examined by the panel.

However the panel opted to back-date the 14-month ban to January when the substance was administered.

The BHA recommendation is that any horse testing positive for a substance prohibited at all times will faced a stand down period of 14 months – 12 months out of training and two months in training but prohibited from racing – from the date of the positive sample.

The out of competition blood and hair samples were taken from Turbine on May 30th. He won at Cork 20 days before that.

“That’s what the BHA do. In this instance they [the referrals committee panel] felt the trainer and owner were totally unaware of what was happening  and they felt it was right to go back to the date of when the horse was exposed to the substance.

“The horse could have run ten times and not won and the trainer, or the vet or the owner wouldn’t have become aware of it.

“So given it was administered in January I suppose that’s why they took that view. They [the trainer and owner] were totally excluded from all blame. That’s possibly why they took the decision they did and the panel have that right,” said the IHRB spokesman, Niall Cronin.

He added that BHA rules are a reference but no more than that for the disciplinary body.

Turbine is the first horse to test positive for anabolic steroids in Ireland although a number of steroid controversies, including the disqualification of Grade One trainer Philip Fenton for possessing steroids, prompted an Anti-Doping Task Force report in 2016.

Turbine’s vet, Donnacha Houlihan, explained to the referrals committee how another horse stabled next to Turbine was being treated with a substance containing Nandrolone and Turbine may have been given it in error.

Hair results showed exposure took place “in a time window consistent with his hospitalisation in January”.

All responsibility for the matter was taken by Houlihan. Hogan was however ordered to pay €1,000 towards the costs of the investigation.

“The horse cannot run again until tests have confirmed there’s no trace of the substance. If the horse is looking to run in April of next year the tests will have to come back clean,” Cronin added.

The range now includes hair analysis and the IHRB’s head of anti-doping, Dr Lynn Hillyer, said: “It is a an important part of the human and sports anti-doping armoury.

“Exposure of a drug at an appropriate time is possible by analysing segments of hair from root to tip. We were able to use it in this case to validate the explanation given for the positive result.”