Gordon Elliott chasing a $500,000 prize on the flat in Kentucky 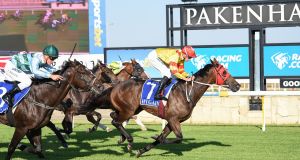 Longclaw will be bidding for glory in Kentucky with Jamie Spencer on board. Photograph: Getty Images

Gordon Elliott is rapidly closing in on €1 million in prizemoney for the Irish National Hunt season but it’s a major $500,000 pot on the flat that the trainer is after in Kentucky on Saturday night.

The two year old maiden Longclaw lines up in the Gaineseway Juvenile Stakes, a one mile Listed contest on grass due off at 11.22 Irish-time at the Kentucky Downs track.

Jamie Spencer travels to take the ride on Longclaw who finished third to the subsequent Debutante Stakes winner Alpine Star in a maiden at the Galway festival last time.

The jockey will have to navigate a 15 of 15 draw and Longclaw, a son of the top US sire, Kitten’s Joy, will run on medication.

Elliott has had over 60 winners already this jumps season between Ireland and Britain but domestically too his handful of weekend runners are on the flat.

They include the topweight Flat To The Max in Down Royal’s Ulster Cesarewitch on Saturday.

Back on the level though this looks a good chance for Linger to resume winning ways after his jumping disintegrated over fences at Tramore last time.

Prior to that Linger had won twice at Galway and although he’s 29lb higher since first winning for Joseph O’Brien in May, his progress on the flat doesn’t look finished.

Malbas has just a 6lb penalty for winning impressively at Bellewstown on Wednesday and should be hard to beat again in the north.

Jessica Harrington’s juvenile team continues to carry much before it and a trio of fillies can do the same in the first three races at Sunday’s Cork fixture.

In sad news the death took place on Thursday of veterinary surgeon and former manager of Moyglare Stud, Stan Cosgrove. He was 91.

During a long and varied career he also co-founded the Racing Academy & Centre for Education (RACE) and was a founding member of the Irish Thoroughbred Breeders Association.

“He was a legend of Irish racing and by common consent one of the most gifted equine veterinarians,” said Horse Racing Ireland’s chief executive  Brian Kavanagh.

“Stan was wonderful company and a great storyteller who was much loved and widely respected within the industry,” he added.