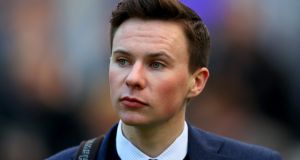 Joseph O’Brien: “I’ve no doubt it’s going to be a huge success. This year has seen great progress. It’ll be among the best facilities in the world if it’s not already.” Photograph: James Crombie/Inpho

Joseph O’Brien has given the under-fire Curragh a vote of confidence ahead of the upcoming ‘Irish Champions Weekend’.

It will be the first Champions Weekend run at Irish racing’s HQ since its €81 million redevelopment was completed.

The new facility has been beset by controversy since it opened for racing in May, including when its former chief executive Derek McGrath was put on ‘gardening leave’ in July.

The project, which included €36 million of State money, as well as investment from top industry stakeholders such as Coolmore and Sheikh Mohammed, has suffered heavy criticism over issues such as low attendances and lengthy queues on Irish Derby day.

Sunday week’s leg of Irish flat racing’s showpiece event is the next big test of the facility which is designed to cater for 30,000 but struggled to cope with an 11,957 Derby attendance in June.

On Tuesday, Joseph O’Brien, second only to his father, Aidan, in the trainer’s championship, predicted it will look better than ever.

“It’s a fantastic facility, one of the best stands anywhere in the world. There were a few little teething problems but that’s happened in every stand I’ve seen redeveloped in recent years.

“I’ve no doubt it’s going to be a huge success. This year has seen great progress. It’ll be among the best facilities in the world if it’s not already.

“It’s one of the best tracks in the world, if not the best, to ride. It’s very fair for a horse and now with facilities to match,” he said.

O’Brien was speaking at a launch for the Pat Smullen Champions Race For Cancer Trials which will take place at the Curragh on Sunday week.

O’Brien will ride in the race and on Tuesday rode work up his own gallops alongside other retired former stars of the saddle, Ruby Walsh, AP McCoy, Paul Carberry and Charlie Swan who will also take part.

Wednesday’s flat action at Gowran sees Royal Dornoch try to win at the fourth time of asking in a seven furlong maiden.

Aidan O’Brien’s runner belied big odds in Goodwood’s Richmond Stakes to finish a running on third behind Golden Horde and Threat at Goodwood.

That’s high class form and the son of Gleneagles looks to have got the better of the draw compared to his most likely danger Agitare.