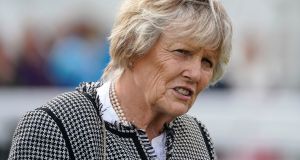 Jessica Harrington: “I’ll talk to connections before Sunday, but it’ll be one of them taking her chance, probably Albigna.” Photograph: Alan Crowhurst/Getty Images

A year after Alpha Centauri’s stellar career ended in shock defeat at “Irish champions weekend” Jessica Harrington is aiming for a happier Group One outcome this Sunday with Albigna in the Moyglare Stud Stakes.

Harrington has indicated the unbeaten Albigna is more likely to carry the Niarchos family’s colours in the juvenile fillies highlight than the impressive Debutante Stakes winner Alpine Star.

The Moone-based trainer has enjoyed a hugely successful campaign with her two-year-old fillies, including with Albigna who overcame inexperience to win the Airlie Stud Stakes in dramatic style in June. Both she and Alpine Star are towards the top of the Moyglare betting, although ahead of Tuesday’s vital forfeit stage Harrington has said only one of them will run.

“Right now I think Albigna is the one who will. They are two wonderful fillies, and it’s a pleasure to train them.

“Alpine Star has only the three runs and Albigna only two. They’re still only learning. I’ll talk to connections before Sunday, but it’ll be one of them taking her chance, probably Albigna,” she said on Monday.

Alpha Centauri carried the Niarchos silks into fifth in the 2017 Moyglare before embarking on a memorable classic campaign that ended in 2018 “Horse of the Year” honours.

However, after four Group One victories in a row her defeat to Laurens at 30-100 odds in the Coolmore Matron Stakes at Leopardstown represented one of the great shocks in the five-year history of “champions weekend”. Only Australia’s eclipse by The Great Gatsby in the 2014 Champion Stakes may compare.

Alpha Centauri’s exploits did, however, cement Harrington’s place among the top echelon of flat trainers in Ireland, with only Aidan and Joseph O’Brien having saddled more winners than her so far this season.

Sparkle N Joy won for Harrington at last year’s “champions weekend” in the Ingabelle Stakes, and her team of entries this time include The King in the Comer Group Irish St Leger.

Irish racing’s €4.6 million showpiece event suffered a blow on Monday when Siskin was ruled out of the Goffs Vincent O’Brien National Stakes.

The prospect of a three-pronged clash between Ger Lyons’ Phoenix Stakes as well as Pinatubo from Godolphin and Ballydoyle’s Armory had been billed as the highlight of the whole weekend.

However the Juddmonte team have elected to keep Siskin instead for Newmarket’s Middle Park Stakes over six furlongs later in the month.

“In the back of our minds the Middle Park was always the race we were looking at most of all. We just feel he’s better suited sticking to six furlongs at this stage,” said a spokesman.

Pinatubo was immediately cut to as low as 1-2 to emulate Quorto who won the National Stakes for Godolphin last year.

The ground at the Curragh is currently good on the round course, good to yielding in the straight, with a largely dry long-term weather outlook for later in the week. Leopardstown’s going is currently good to firm on both tracks that will be used on Saturday.

The Harrington team will be represented over the jumps on day three of Listowel with Morosoni in the featured €67,500 Liam Healy Lartigue Hurdle. Morosoni is one of three JP McManus-owned hopes, including the topweight Gardens Of Babylon.

Co Kilkenny-based Ray Cody has only started his training career, and Razoul gave him a first winner at Kilbeggan in July. On testing ground Razoul is at the right end of the handicap, and conditions could help him reverse earlier form with Rocky Shores during the summer.

The four-year-old is a half brother to the top class Hong Kong-based stayer Exultant, known as Irishcorrespondent when based here with Michael Halford.

His CV now boasts a series of Group One wins, including the Hong Kong Vase, and in pedigree terms his younger sibling is a stand-out.