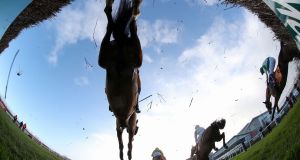 Leopardstown’s authorities appear to be playing down reports of a possible switch to a Friday start for next year’s Dublin Racing Festival.

Earlier this week the track’s chief executive outlined how a review of last weekend’s €2.1 million showpiece would include examining whether running the festival on a Friday and a Saturday might work better.

The third renewal of the Dublin Racing Festival once again saw last’s Saturday crowd exceed the Sunday even though the latter is traditionally Irish racing’s major date.

Saturday’s crowd of 14,204 was the single biggest attendance at the Dublin Racing Festival so far, almost 2,000 more than a day later which hosted the €250,000 Paddy Power Irish Gold Cup.

Last year Leopardstown’s success with its established Thursday evening summer fixtures – which include post-race concerts – prompted the new Curragh to put a lot of resources into Friday evening dates.

It included four Friday evening fixtures in a row through August but the experiment was judged unsuccessful and Horse Racing Ireland reversed the trend for this year.

Suggestions that Leopardstown, which is run by HRI, was considering running the 2021 Dublin Racing Festival over Friday and Saturday has received a mostly cool response.

The trainer and RTÉ pundit Ted Walsh called it a “hare-brained” idea, pointing to regular traffic problems on the M50 on Fridays with the potential to affect access to the south Dublin course.

On Friday, Leopardstown’s chief executive Tim Husbands stressed that any proposal to change the festival’s structure is part of an overall review.

“It’s really just a thought piece at the moment, that’s all it is. I wouldn’t exaggerate its importance. It’s just a conversation we’re having as part of our normal review process,” he said.

“If you look at the statement I made I said if it’s not broken then there’s nothing to fix. We always review every race meeting, look at its performance each day, how it affects the industry etc. It’s really just a consideration. We’ve taken it no further.

“The first conversation looked at how we might increase the number of attendees, whether Friday was better than the Sunday, whether it created a different audience or not, which is where if it’s not broken don’t break it.

However Husbands believes that such sporting competition didn’t affect the crowd and instead, along with a post race concert, helped attendance levels.

“We benefitted from the fact that this year there was a rugby match taking place. We created some additional interest by having Aslan play which gives a different audience.

“It all appealed to a wide variety of racegoers, either industry-led ones or those with a casual interest who wanted to enjoy a sporting occasion and were also able to enjoy the rugby with a large group of people and then go to a concert.

“I think it was a coming together of a whole number of different audiences,” he added.

This weekend’s domestic feature is Sunday’s €100,000 Boylesports Grand National Trial where Gordon Elliott will have a handful of contenders to try and win the marathon slog for a third year in a row.

The best of his quintet could be Minella Till Dawn, raised a stone in the ratings for winning at Cork last month but who subsequently missed out on a place in Gowran’s Thyestes Chase.

Elliott also looks to hold a good chance in a maiden hurdle with Pencilfulloflead now that Davy Russell’s mount is upped half a mile in trip.

Having a distant view of Asterion Forlonge over the minimum trip last time looks a lot different now the latter is a proven Grade One winner.

Cheltenham festival clues could be few and far between although Ferney Hollow’s bumper appearance may count.

The highly-regarded point to point scorer hasn’t looked straightforward in two racecourse starts to date and sports a first-time hood on Sunday. Current 16-1 odds for the Cheltenham bumper could be slashed if he wins impressively in the headgear.

Willie Mullins flies the Irish flag on his own with the maiden Ciel De Neige in Saturday’s Betfair Hurdle at Newbury.

Beaten at odds of 1-4 on his last start in Limerick maiden over Christmas, Ciel De Neige will be ridden by Aidan Coleman. Barry Geraghty is on the other McManus hope Never Adapt.

There is other Irish cross-channel interest on Saturday with John Queally’s Djingle taking his chance in Warwick’s Grade Two Kingmaker Novice Chase.