Rachael Blackmore has Grade One ammunition for Dublin Racing Festival 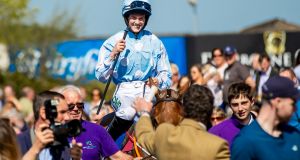 The unbeaten Honeysuckle is one of 13 opportunities Rachael Blackmore has to make it a very lucky Dublin Racing Festival at Leopardstown this weekend.

Blackmore’s stellar book of rides over two days holds the promise she could be a dominant personality at the third renewal of Irish jump racing’s €2.1 million shop-window event.

She has mounts in all eight Grade One events and Honeysuckle is one of three expected favourites that also include Sunday’s odds-on hotpot Aspire Tower.

It’s the sort of firepower that could further boost the momentum of an already-pioneering career which sees the 30-year-old acclaimed as one of the top jockeys in the sport.

All but one of her 13 mounts are for Henry de Bromhead, who bookmakers anticipate will provide the principle challenge to a potentially dominant Willie Mullins.

In a remarkable show of both strength and intent, the champion trainer has made 51 declarations for the weekend.

That’s more than twice the numbers for both his great rival Gordon Elliott and de Bromhead. Add in Joseph O’Brien’s 15 entries and the country’s top four trainers could have 113 runners between them over the course of the festival’s 16 races.

Betting markets suggest the only threat to their Grade One hegemony may be from the Paul Nolan-trained Latest Exhibition in Saturday’s opener.

However, the single most eagerly anticipated prospect on Day One is probably Honeysuckle lining up for the €200,000 PCI Irish Champion Hurdle.

The mare boasts a spotless record in half a dozen racecourse starts, and another impressive victory may see her switch targets to the Champion Hurdle itself at Cheltenham in five weeks’ time.

With Apple’s Jade apparently on the slide, and Benie Des Dieux possibly going for the Stayers at Cheltenham, the OLBG Hurdle there currently shapes as a potential open goal for Irish racing’s third outstanding mare.

Whether or not the temptation to go for the championship title proves irresistible in March will be largely determined by Saturday’s performance in a 10-strong field that includes four Mullins rivals.

They include the proven course and distance specialist Sharjah with champion amateur Patrick Mullins staying on board him. No amateur has won since Ted Walsh on Daring Run in 1982.

Nevertheless, much of the intrigue on Day One revolves around how Honeysuckle copes with the new set of circumstances thrown at her.

There’s nothing to suggest she won’t go left-handed but until you go and do it, you don’t know

The only other time she’s run at the minimum two-mile trip was in a much lower grade. This will also be the first time she’s raced left-handed on the racecourse, although she did win a point-to-point going that way.

De Bromhead knows better than most how such an apparently minor factor can prove important.

His Grade One winner A Plus Tard, who lines up under Blackmore in the earlier Ladbrokes Dublin Chase, is significantly better going left rather than right. How Honeysuckle copes with that new challenge, and the trip, will be crucial.

“There’s nothing to suggest she won’t go left-handed but until you go and do it, you don’t know,” de Bromhead admitted.

There’s also a suspicion that a visually impressive victory in the Hatton’s Grace last time mightn’t amount to a whole pile in form terms, given she was clear of Bacardys and Apple’s Jade, albeit in ultra-smooth style.

In her favour is a 7lb sex allowance and the fact as a six-year-old she should still be progressing. The fact she and the woman on her back have been perfect in six starts to date will only help the chances of making it seven.

Nevertheless, from a betting point of view the fact so many question marks exist could make Sharjah the value.

Match bet odds of 2-1 are available on de Bromhead outscoring Mullins in terms of winners this weekend.

The pair dominate the Dublin Chase with Pat Fahy’s outsider Castlegrace Paddy the only one of eight runners not supplied by them.

Rustiness was an excuse for the hype bubble surrounding Chacun Pour Soi getting burst over Christmas. He has almost four lengths to find with A Plus Tard on that form.

The strength of this race is underlined by how the hat-trick seeking Min appears to be Mullins’s third-string given how Cilaos Emery is unbeaten in three starts to date over fences.

Another Mullins quartet, along with O’Brien’s Fakir d’Oudairies, represent the Arkle challenge to Notebook, who beat that rival here at Christmas.

A notable trend this season, however, has been how many horses from the Mullins camp have progressed on the back of each run.

Given how Cash Back has been impressive in his two starts to date, it may not be unreasonable then to believe even better is to come.

Ultimately, though, with Elixir d’Ainay representing the Envoi Allen form in the opening Lacy Partners Novice Hurdle, everyone else faces a formidable task against the Mullins team’s strength in depth.