Vet accepts responsibility for Turbine being administered drug by mistake 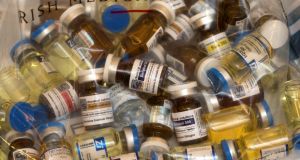 The case is believed to be the first time a race horse has tested positive for an anabolic steroid in Ireland. Photograph: Jason Clarke

The Denis Hogan-trained Turbine has been banned from racing until the end of March next year, and disqualified from a victory in Cork in May, after testing positive for an anabolic steroid.

The case is believed to be the first time a race horse has tested positive for an anabolic steroid in Ireland. However Co Tipperary-based Hogan has escaped any penalties after a vet who had Turbine in his care for a wind operation in January accepted responsibility for the horse being administered a substance containing Nandrolone by mistake.

Turbine ran twice in May, including when winning at Cork, and tested positive for Nandrolone after both races.

At a referrals committee hearing chaired by Justice Tony Hunt on Tuesday, it was heard that a blood sample, and hair samples, were subsequently taken in an out of competition test on Turbine on May 30. They too were positive.

The same tests were carried out on five other horses at Hogan’s yard at the same time and they were negative.

Evidence was heard on Tuesday from the Irish Horseracing Regulatory Board’s chief veterinary officer, Dr Lynn Hillyer, who confirmed that Nandrolone is prohibited at all times and that no explanation was offered for the findings on the day of the unannounced testing.

She added she was contacted the day following the inspection by Donnacha Houlihan, Hogan’s vet, who offered a possible reason for the presence of Nandrolone.

Houlihan explained that the gelding had been in his practice for ‘wind’ surgery on January 24th and may have been administered Laurabolin, a product containing Nandrolone, by mistake.

The vet outlined to the referrals panel how another horse at his practice was being treated with Laurabolin for three days at the same time as Turbine was there for his surgery. This horse was stabled next to Turbine. His belief was that Turbine had been administered the Laurabolin in error.

The panel heard how practice records were examined and the results of the hair samples assessed. The hair results showed that Turbine had been exposed to Nandrolone “in a time window consistent with his hospitalisation in January 2019”.

The panel noted that Hogan provided full co-operation to the investigation and that all responsibility was accepted by Mr Houlihan.

They restricted Turbine from returning to training until January 31st next year and from running until March 31st. They also ordered Hogan pay a contribution of €1,000 towards the costs of the investigation.

An IHRB spokesman afterwards said the suspensions are in line with British Horseracing Authority guidelines.

They state that any horse testing positive for a substance prohibited will face a stand-down period of 14 months – 12 months out of training and two months in training but prohibited from racing – from the date of the positive sample.

In this case penalties appear to have been back-dated to last January.

Also on Tuesday leading trainer Henry de Bromhead was fined €2,000 after his Downpatrick winner in June, Game Present, tested positive for an ant-inflammatory. The horse was disqualified.

Game Present tested positive for Triamcinolone Acetonide and in evidence de Bromhead stated that he had made an error in entering the horse prior to the advised 25-day withdrawal time advised by his veterinary surgeon.