However, International Stakes winner could end up facing Elarqam again 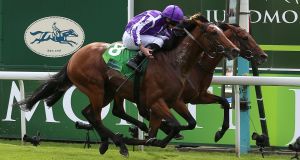 Japan (near side) ridden by Ryan Moore wins The Juddmonte International Stakes ahead of Crystal Ocean. Photo: Nigel French/PA Wire

Aidan O’Brien’s Japan is a general 9-4 favourite to end an eight-year drought for the home team in the upcoming QIPCO Irish Champion Stakes but could wind up facing Elarqam again.

Elarqam looked unlucky when finishing just a head and a length behind Japan in last week’s Juddmonte International at York, after which jockey Jim Crowley said he should have won.

“We had him in the Irish Champion and took him out earlier in the year. But Sheikh Hamdan (owner) said at the time that if necessary we could always put him back in, so we won’t disregard that – we will look at the race,” Johnston reported.

“The Champion Stakes (at Ascot in October) is the obvious long-term target. But we feel he’s benefited this year from keeping him on the go, so it would be quite nice to give him a race each month until the end of the season,” he added.

Some bookmakers have priced Elarqam at 7-1 for the Leopardstown contest should he be supplemented.

The last Irish trained winner of the race was So You Think in 2011. Since then it has been dominated by cross-channel winners including the ill-fated Roaring Lion last year.

A novel international element to the Champion Stakes this year is likely to be provided by the Japanese trained star with the Irish name, Deirdre.

Oisin Murphy steered the mare to a memorable victory in Group One company almost a month ago when Deirdre landed the Nassau Stakes at Goodwood.