No IHRB action taken over Some Neck’s Galway Plate withdrawal 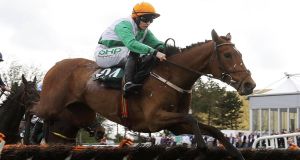 Rachel Blackmore on board True Self. Donnacha O’Brien teams up with the Willie Mullins-trained six-year-old mare for the Ebor. Photograph: Lorraine O’Sullivan/Inpho

The historic Sky Bet Ebor is worth £1 million for the first time, double last year’s prize fund and almost five times more than when Mullins won it a decade ago with Sesanta. She was just the third Irish-trained horse ever to win the prestigious prize.

Two more have been victorious since, and as well as the Mullins pair Max Dynamite and True Self, Ger Lyons’s Mustajeer also takes his chance this time.

Colin Keane rides last year’s Ebor fourth, while his rival for the Irish jockey’s title, Donnacha O’Brien, teams up with Mullins for True Self.

Mullins also has three runners at Saturday’s two Irish fixtures, and goes into the weekend action with no further action having been taken by the Irish Horseracing Regulatory Board after Some Neck’s controversial Galway Plate withdrawal last month.

The excuse lodged for Some Neck’s withdrawal from the €300,000 steeplechase (clerical error) wound up being referred to the IHRB chief executive Denis Egan for further investigation.

Both Some Neck and JP McManus’s Drumcliff (temperature) were taken out of the Plate the day before the race. They were replaced by two reserves, McManus’s Movewiththetimes, and Pylonthepressure who, like Some Neck, is owned by Rich Ricci and trained by Mullins.

After being interviewed by the Galway stewards on race-day, Mullins said he was surprised and disappointed with the matter being referred.

On Friday an IHRB statement outlined the result of the investigation, and revealed that part of it included a review of the audio recording of the withdrawal. Having considered what was said it has been decided no further action will be taken and the excuse lodged will be recorded as “declared in error”. Nevertheless a fine of €200 under Rule 194 has been imposed.

Colin Keane is committed to Mustajeer in the Ebor, which leaves Donnacha O’Brien to take his place on True Self in the Ebor.

The six-year-old mare is running in her first flat handicap but has plenty to prove having finished last to Peach Tree in last month’s Stanerra Stakes at Leopardstown.

O’Brien has three rides for his brother Joseph on the rest of the Ebor card, including Speak In Colours in the Group Two City Of York Stakes.

Ballydoyle’s Le Brivido drops from Group One level in the same race which sees the remarkable veteran Gordon Lord Bryon try to repeat his 2012 victory in the race.

Tom Hogan’s triple Group One winner has his 102nd career start, and will have Keane aboard for the first time as he pursues a first win in over two years.

On the home front Patrick Mullins faces a hectic Saturday schedule. The champion amateur is on Stratum in the last at Killarney which is due off at 4.40pm. He then faces a near 150-mile journey to Kilbeggan for the ride on the newcomer Blue Jacaranda in the bumper that starts at 8.10pm.

1 Nicholas Quinn: ‘Swimming became how I dealt with grief’
2 Reality Bites – Tales from the new normal: Caitríona Cormican
3 James McClean still failing to learn his own online history lesson
4 A beautiful, happy accident - Moneyball is the best sports movie ever
5 Ian McKinley: ‘You do take for granted the simple things in life’
Real news has value SUBSCRIBE