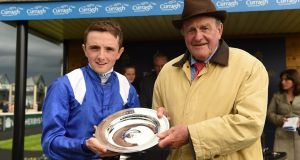 Jockey Chris Hayes with trainer Kevin Prendergast after Awtaad’s victory in the Tattersalls Irish 2,000 Guineas at the Curragh in 2016. Photograph: Paul Mohan/Sportsfile via Getty Images

Classic-winning jockey Chris Hayes has pointed to himself being one of three senior riders referred-on over their use of the whip last week as evidence of how new whip rules introduced in April aren’t working properly.

Hayes is facing the prospect of appearing before a referrals committee panel for a second time this season having been the first jockey to receive a mandatory minimum six-day suspension in May.

Under the new Regulation 10, which includes the controversial eight-stroke limit on riders, after which a stewards enquiry must be held, jockeys are automatically ‘sent on’ after a fourth whip offence.

In May Hayes’s fourth offence wasn’t about exceeding the strike limit but instead involved the Blue Wind Stakes winner Tarnawa being marked after the race.

Since then the Irish Jockeys Association has described as “plainly unjust” how riders, who have already been penalised by a panel, face appearing before them again should they breach the regulations just one more time in a year.

That’s the prospect facing Hayes who at Roscommon last week got referred on by the stewards after his mount Helvic Dream was marked.

They are the most high-profile cases among a continuing and regular flow of whip rule breaches at Irish tracks.

It maintains the focus on regulations introduced by the Irish Horseracing Regulatory Board in April which followed a general trend in other major European racing jurisdictions by introducing a stroke limit.

After there were no whip offences at the Irish Derby festival in June the IHRB said a bedding-in period was over.

“My personal view is they went to move with the times and that’s fine. I just think the rule itself isn’t working,” said Hayes on Tuesday.

“Riders like me, Sheamie Heffernan and Kevin Manning, we’re riding seven days a week, up to three to four hundred horses a year. If you’re in a finish 60 to 80 per cent of the time, chances are a rule is going to be broken at some stage.

“I hit the filly [Tarnawa] four times. This time [Helvic Dream] I’ve struck the animal three times with the forehand and one backhander. He’s after getting four strokes too,” he added.

Earlier this month another Group One jockey, Billy Lee, was cleared when appearing before a referrals committee after a fourth whip offence involving a filly he rode at the Galway festival being marked.

Having considered evidence the committee found they were unable to determine if Lee’s whip use was at fault.

Hayes believes a strict stroke limit and having all possible rule breaches under the one regulation isn’t helping the overall situation.

“Take me out of the equation. If you’ve riders like Séamus Heffernan and Kevin Manning in, then there’s something not working. They’re not whip jockeys. Kevin is always a man who goes for the stick late. Séamus Heffernan’s the same. I’m most certainly not a whip jockey.

“If senior riders are getting done then there’s a problem somewhere. It needs to be tweaked. I’m sure the powers-that-be have enough sense to spot it if we can spot it. I hope common sense can prevail,” he said.

Hayes is set to ride the Epsom Derby runner-up Madhmoon in the QIPCO Irish Champion Stakes in less than three weeks’ time. He doesn’t anticipate any upcoming referrals committee appearance interfering with that.

The former triple-champion apprentice won the 2016 Irish 2,000 Guineas on Awtaad in Sheikh Hamdan’s colours. In 2013 he landed the Group One Matron Stakes on La Collina and seven days later the Irish St Leger on Voleuse De Coeurs.