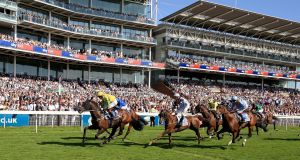 Mustajeer won the first million-pound edition of the Sky Bet Ebor at York for Ireland.

Ger Lyons’ raider improved on his fourth place last year in the famous handicap, landing the lucrative spoils by three-quarters of a length at 16-1 under Colin Keane.

The winning pair were always within striking distance from a prime draw in stall two, biding their time before taking over from Ben Vrackie and Frankie Dettori and going clear in the final furlong.

Red Galileo — given a fine ride by rising star Cieren Fallon — was the final challenger, staying on into second ahead of fellow 25-1 shot Desert Skyline, with Raymond Tusk fourth at 16-1.

Mustajeer had his race well won by then, though, and the six-year-old’s decisive success earned an immediate quote of 16-1 for November’s Melbourne Cup.

Lyons was not present, but tweeted: “Fantastic performance by ctkjockey & Mustajeer & my team winning the Ebor. Now I’m off out to cut the grass.”

Keane said: “It’s brilliant. After he ran so well last year the plan was to come back.

“He’s got better with racing. Last year he was difficult to handle, but he’s been better this year. He wears ear plugs.

“He is more relaxed and seems to get better with age.”

Kerri Lyons, assistant to her father, said: “That’s his last race for us. He’s been sold to go to Australia, but David (Spratt) still owns a share. Hopefully it will be the Caulfield Cup and then the Melbourne Cup.

“That will be a dream come true and he’ll do well for the new owners (Australian Bloodstock).”

She added: “His next port of call is down in Australia.

“He did that well. Colin was very happy with him.”