Harrington keen on breaking her Breeders’ Cup duck at Keeneland 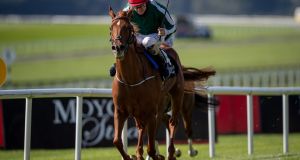 Jessica Harrington will be triple-handed in pursuit of a first Breeders’ Cup success in Keeneland next week.

A trio of Cayenne Pepper (Filly & Mare), Cadillac (Juvenile Turf) and Oodnadatta (Juvenile Turf Fillies) could put an end-of-season seal on a campaign that sees Harrington in third place in Ireland’s trainers’ championship.

Only Aidan and Joseph O’Brien are ahead of the woman who has transformed herself into one of the country’s top handlers on the Flat in recent years.

She has saddled 67 winners at home this season – and secured over €2 million in prizemoney – as well as landing Group One success with Alpine Star in Royal Ascot’s Coronation Stakes in June.

Her status as a dual-purpose trainer is underlined on Wednesday with seven runners divided between her local track at Punchestown and the all-weather at Dundalk.

However, it will be the $31 million Breeders’ Cup, US racing’s biggest meeting, that’s going to be the focus of Harrington’s attention next week.

She was out of luck in her first attempt at the self-proclaimed ‘World Championships’ event when Albigna couldn’t overcome a slow start and finished fourth in the Juvenile Fillies event at Santa Anita.

Neither that reverse, or the coronavirus pandemic, is preventing the Irishwoman from taking on the best of the Americans again. Stable jockey Shane Foley will also travel to the Kentucky track.

“You go anywhere now, it’s a risk. Do the shopping and it’s a risk. It’s the same over there. You’re no more at risk than you are over here,” Harrington said on Tuesday.

The Blandford Stakes winner, and Irish Oaks runner-up Cayenne Pepper is a 6-1 shot in some lists for the $2 million Filly & Mare Turf over just shy of 10 furlongs on Saturday week.

Cadillac was fifth to St Mark’s Basilica in the Dewhurst last time but prior to that was an impressive winner over last weekend’s Group One winner Van Gogh at Leopardstown during Irish Champions Weekend.

He is due to line up on Friday week’s card for the $1 million mile juvenile event on grass while on the same programme Oodnadatta will take her chance in the juvenile fillies equivalent.

Oodnadatta was third to Shale in the Moyglare Stud Stakes last time out.

Ground conditions at Keeneland are likely to be very different to the ultra-fast surface at Santa Anita last year.

“I’ve been to the track before and seen horses work there. It’s quite sharp. They’re having rain this week but it’s due to be dry next week. They think the ground will be all right: it’s won’t be a bog,” Harrington added.

She also indicated her intention to be a major presence on the upcoming winter action over jumps.

“There are a fair old few there [for the jumps] and we’ve got some very nice horses,” said Harrington who will have to do without her long-time ally Robbie Power.

Difficulties in moving between Ireland and Britain due to coronavirus restrictions means Power has decided to base himself in England.

Harrington has left in her promising chaser Sizing Pottise among seven entries for Saturday’s Grade Two Lough Construction Chase on Day Two of the Down Royal festival.

Separately, other Irish interest at the 2020 Breeders’ Cup will include Dermot Weld’s dual-Group One winner Tarnawa.

A decision on whether the filly who won the Prix Vermeille and the Prix de l’Opera on her last two starts will tackle either the $4 million mile and a half Turf, or the Filly & Mare, won’t be taken until the weekend.

“Christophe Soumillon will take the ride again whichever she goes for. He has won two of France’s biggest races on her and I’m sure she will represent us very well again,” said Weld who is also yet to saddle a Breeders’ Cup winner.

With Love retired for the season, and Ghaiyyath retired to stud, Tarnawa is currently an 11-4 second-favourite for the Turf behind only Aidan O’Brien’s mare Magical.