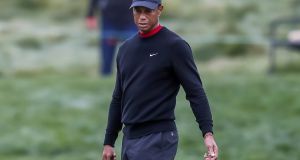 Tiger Woods reacts on the 18th green during the final round of the Zozo Championship at Sherwood Country Club in Thousand Oaks, California. Photograph: Etienne Laurent/EPA

The numbers game isn’t adding up at all, at all for Tiger Woods as he heads into next month’s US Masters as the defending champion and getting ever more reliant on hoping a return to a favoured hunting ground will be akin to flicking a switch.

But there are no guarantees, certainly not based on his performances throughout 2020 which has seen him claim just one top-10 finish in his eight tournament appearances.

In fact, that tied-9th finish in the Farmers Insurance Open was in his very first outing of what would be a Covid-19 impacted season. His results through the year have seen him finish: 9th-68th-40th-37th-58th-51st-MC-72nd and seen him drop down the world rankings, from sixth at the start of the year to currently 28th in those rankings.

Woods was back in the gym a day after registering that tied-72nd finish in the Zozo Championship where he was never a factor and has yet to decide whether he will add next week’s Houston Open onto his schedule or if he will head to the Masters defence with no further competitive play.

One logistical factor that Woods foresees in getting ready for the Masters is managing his practice rounds which, of course, will, like the tournament, be behind-close-doors with no spectators. “There’s going to be a lot of players in the field that week, trying to get your practice rounds in in time. Plus, this late in the year, daylight is going to be a little bit more of a challenge. Trying to get it all organised on pace with weather and time, it’s going to be a little bit different for all of us,” he said.

Harrington gets back on PGA Tour beat

With golf out of bounds at home due to the Level 5 restrictions being enforced, Pádraig Harrington has decided to head back across the Atlantic to play on the PGA Tour . . . for the first time since the Arnold Palmer Invitational at Bay Hill back in March.

The 49-year-old Dubliner spent much of the summer occupying himself with making coaching videos – which have been compiled on his own YouTube channel – and performed well in recent events on the European Tour, including a top-10 finish in the Scottish Open.

Harrington is playing this week’s Bermuda Championship on the PGA Tour, where Séamus Power is also in the field.

The European Tour makes a debut appearance in Cyprus this week, where in-form Jonny Caldwell, fresh from a top-five finish in Italy, and Cormac Sharvin are competing in the Cyprus Open at Aphrodite Hills, the first of back-to-back events on the Mediterranean island.

Dustin Johnson (just about) became just the fourth player to spend 100 weeks of his career at world number one, joining Tiger Woods (683), Greg Norman (331) and Rory McIlroy (106) on the magic number. Jon Rahm would have overtaken him with an outright second place at the Zozo, but Justin Thomas’s final hole birdie tied him with the Spaniard and denied Rahm reclaiming the top spot.

“I was given some great advice [by Angela Stanford]. She told me that God already knows the outcome, so just go play” – American Ally McDonald attributing her breakthrough win on the LPGA Tour – in the Drive On Championship – to her faith. The win was a timely one, arriving on her 28th birthday.

“The fact that golf is worried about a hoodie is honestly what’s wrong with golf” – Harold Varner III giving it straight after Rory McIlroy joined Tyrrell Hatton in wearing a hoodie as part of his golf gear.

“Absolutely delighted for @RossMcGowan!!! Finished 2nd to me in Dubai in 2009 then lost his game a little bit. Has persevered and got his rewards” – Lee Westwood tips his cap to McGowan after the Englishman ended his long winless drought with success in the Italian Open. McGowan snapped an 11-year drought, dating back to his Madrid Masters win in 2009.

“A gentleman to play with @RossMcGowan and thoroughly deserved win. Personally, lots of positives and clearly a few areas to work on” – Laurie Canter, long time leader in Italy, on narrowly losing out to McGowan.

Suzann Pettersen was a serial, globe-trotting winner throughout her career and the Norwegian’s successful defence of the 2013 LPGA Taiwan Championship brought with it another milestone as she moved pass the $2 million in season’s earnings. Pettersen fired a final round three-under-par 69 for a total of 279, giving her a five-stroke winning margin over Spain’s Azahara Munoz.

In what was her 14th career win on the LPGA Tour, Pettersen attributed Munoz’s strong final round play as a contributory factor in keeping her own mind on the task at hand. “I can almost thank her for keep pressing and keep pushing me because I just had to keep staying aggressive and try to make birdies,” she said.

Q: When preparing to take their putt on the green and attempting to work out the line of the putt, Player A inadvertently steps on the ball-marker and it sticks to the bottom of his shoe. Is she liable to a penalty?

A: No, not in this instance: Under Rule 13.1d, Player A’s actions are considered accidental and the ball-marker must be replaced with no penalty to anyone. If the exact spot from where the ball-marker was moved is not known, it must be estimated.