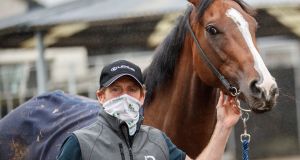 Johnny Murtagh is targeting next year’s Royal Ascot with his star Group One filly Champers Elysees.

Initial plans for an end of season tilt at next week’s Breeders’ Cup in Keeneland have been shelved for the popular runner who gave Murtagh a first top-flight victory as a trainer in last month’s Matron Stakes during Irish Champions Weekend.

“There will be no Breeders’ Cup this time. She has gone out to the paddock and she’ll be back next year.

“She’s a three-year-old filly, she’s been busy, and the ground was testing enough the last day [when fourth in Newmarket’s Sun Chariot Stakes],” Murtagh said on Monday.

Prior to that run behind Nazeef at Newmarket, Champers Elysees was purchased by the high-profile Japanese owner, Teruya Yoshida.

“Mr Yoshida is a big supporter of Ascot so we will hope to get her back to Royal Ascot. There are two races for her, the fillies’ race [the Duke Of Cambridge Stakes] and the Queen Anne,” Murtagh added.

It has been a breakthrough season for the former champion jockey who has saddled 41 winners and earned prizemoney in excess of €1 million.

It puts Murtagh fifth in the trainers’ championship at the moment although he doesn’t expect to hold off Dermot Weld for that position by the time the season ends on Saturday week at Naas.

“We would like to come top five in Ireland with a string of 56 horses but Mr Weld is only ten grand behind us and he looks like coming strong. But we’ve had a brilliant year.

“We’re tapering down now. There are a few two-year-olds to run and two horses in the Finale Stakes but all in all I’d say we’re nearly finished this year,” he said.

Significantly though Murtagh’s success has been recognised by his former ally, the Aga Khan, who has added him to his list of trainers in Ireland for 2021.

“It was a surprise but we were hoping to showcase what we could do and that one of the big firms would see how well we’ve done and back us, it’s great recognition of the year we’ve had,” Murtagh said.

Meanwhile, English trainer Ralph Beckett will be represented at the Breeders’ Cup after confirming both the Royal Lodge winner New Mandate and the Dewhurst fourth Devilwala will line up in the Juvenile Turf race at Keeneland.