Gosden looks poised for a bumper ‘Champions Day’ at Ascot 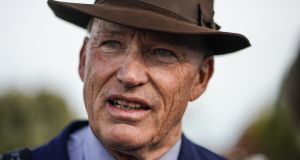 In 2012 it took Frankel to stop an Irish hot streak of four-in-a-row on ‘British Champions Day’ and a different kind of ‘four-timer’ is preoccupying bookmakers ahead of Saturday’s Ascot showpiece event.

John Gosden is all but assured anyway of defeating Aidan O’Brien for the Britain’s champion trainer title. However the potential to do so in style remains as the curtain officially comes down on the cross-channel flat season.

With favourites for three of the four Group One events up for grabs – and a hot favourite in Stradivarius for the Group Two Qipco Long Distance Cup – some layers are offering only 14-1 about a Gosden demolition job across four races.

O’Brien is represented in the same four contests, with five of his dozen ‘Champions Day’ starters set to line up in the Fillies & Mares event. Both Capri and Rhododendron will also try and give the Irishman a first ever success in the Champion Stakes.

But for once O’Brien appears outgunned for big-race ammunition as his English rival can in particular look forward to Cracksman defending the Champion Stakes title and Roaring Lion reverting to a mile for the QEII.

With an advantage of over a million pounds in the trainers standings anyway, victory for one of them will guarantee Gosden a third championship and maintain the Englishman’s recent big-race momentum.

With back-to-back Arcs for Enable, and Too Darn Hot all but certain of being crowned champion two year old, Saturday’s quartet of Cracksman, Roaring Lion, Stradivarius and the filly Lah Ti Dar represent a potentially crushing display of firepower.

They will appear at a supposed end of season climax despite there being another Group One race to be run at Doncaster next week. It reflects the arbitrary nature of a date which seems to contain only one annual certainty – that it will take place on very soft ground.

That has prompted a switch to the mile QEII for the season’s star mile and a quarter three-year-old, Roaring Lion. It also presents Cracksman with similar conditions to last year as he tries to redeem his somewhat tarnished reputation.

A struggle to win the Coronation Cup, followed by Royal Ascot defeat, and a record summer drought which prevented him running since, means Cracksman now represents something of an enigma.

2017’s top-rated European horse dons first-time blinkers on what will be his final start. Combined with very soft going that will have plenty piling in to Frankie Dettori’s mount. But for an odds-on favourite there are plenty ifs and buts about him.

If he fails to deliver, Crystal Ocean will be widely expected to pick up the pieces for a first career Group One. But with ‘heavy’ in the ground description it’s not hard to see why O’Brien is giving the 2017 Leger hero Capri his chance.

The grey is a quality colt anyway and stepped up from his comeback to run a fine fifth in the Arc. Found twice finished second in the Champion Stakes after running in the Arc but Capri looks like he could actually progress again from Longchamp.

If there’s a crack in the favourite Capri can fill in a rare Group One blank on O’Brien’s Anglo-Irish big-race CV.

O’Brien’s two fillies, Happily and I Can Fly, are joined in the QEII by Ken Condon’s Irish Guineas winner Romanised although the big danger to Roaring Lion should be the French star Recoletos who is notably versatile in terms of ground.

The Ballydoyle trainer’s Group One focus will start early on Saturday morning as last year’s Derby runner-up, Cliffs Of Moher, takes his chance in the Caulfield Cup in Melbourne.

Winx’s jockey Hugh Bowman takes the ride on a colt who is known as The Cliffsofmoher in Australia. The race, which along with the Melbourne Cup and the Cox Plate represents something of an Australian Triple Crown, is due off at 6.40am Irish-time.

The €1.6 million purchase Old Glory is one of two Ballydoyle runners in Leopardstown’s Group Three Killavullan Stakes later on Saturday. The Frankel colt has almost two lengths to find with No Needs Never on Dundalk form earlier this month but could relish the return to turf.

Top National Hunt jockey Rachael Blackmore gets the chance to secure a significant Listed victory on the flat when teaming up with Riven Light in the Trigo Stakes. The Willie Mullins runner didn’t show his best form in Korea last month but a 112 rating gives him the clear winning of this and ground conditions don’t look like getting too quick.

There are a pair of Listed races at Naas on Sunday on top of the historic Birdcatcher Nursery. However it’s the €120,000 Foran Auction Race Final that’s the big-money pot and Jessica Harrington’s Dragon Roll could bounce back from a lacklustre run over a mile last time.

Bongiorno can relish the trip and better going in the concluding Bluebell Stakes.