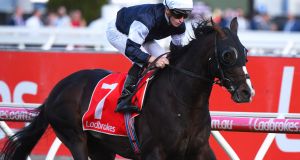 Willie Mullins couldn’t secure a famous English-Irish Cesarewitch double on Sunday, and instead it was Brazos that led home an all-Cork finish at Navan.

The 16-1 winner of the €100,000 Irish Cesarewitch is trained near Innishannon by John Murphy, and jockey Shane Foley punched him to a lucrative success ahead of John Joe Walsh’s David’s Charm.

It scuppered any punter presumption that on the back of Low Sun leading a Mullins 1-2 in Saturday’s English Cesarewitch it was set up for the champion jumps trainer to secure another valuable flat handicap in the Irish version.

However, on a day when Ruby Walsh failed to celebrate his comeback with a winner at Limerick, fortune also seemed to desert his boss in Navan too.

Pleasure Dome was significantly backed down to 5-1, sharing joint-favouritism with his stable companion Exchange Rate in a race numerically dominated by Mullins’s seven runners.

Ultimately Nessun Dorma did best of the septet, but only in fourth, a place ahead of Exchange Rate who did well to recover from being hampered in an incident soon after the start.

Donnacha O’Brien’s mount Cliffs Of Dooneen stumbled badly on the bend into the back straight and hampered a number of horses, including the outsider Like An Open Book who unseated her rider Julie Burke. Cliffs Of Doneen was pulled up.

None of which affected Foley whose pre-race confidence in Brazos wasn’t reflected in the betting.

“He’s always been a good horse and he beat Exchange Rate in Killarney [in August]). I saw this morning he was 5-1 and we were 33-1. I couldn’t believe how much difference there was in their prices!”

It was a 55th winner of the season in Ireland for Foley, with Romanised’s Irish 2,000 success in May the highlight of a successful first season riding as a freelance.

Donnacha O’Brien’s season has been better than almost anyone else’s with a first championship guaranteed and three classics in the bag.

However it’s a reflection of his campaign that even Peach Tree’s impressive Listed success in the Staffordstown Stud Stakes probably won’t prevent this Sunday being a day the 20-year-old will rather forget.

Prior to Cliffs Of Doonen having to be pulled up O’Brien was beaten on the first three favourites, including Lost Treasure who looked to throw away the Waterford Testimonial Stakes in a close finish.

O’Brien appeared to have timed his challenge perfectly on the 2-1 favourite, but taking the lead yards from the line Lost Treasure seemed to both pull himself up and hang left onto Medicine Jack. The latter got the verdict by a short head and kept the prize in a stewards’ inquiry.

Peach Tree completed an Aidan O’Brien Listed double despite the evens favourite Never No More failing to make the frame in the Legacy Stakes, his 8-1 stable companion All The King’s Men made all for the in-form Seamus Heffernan.

“He’s been working a little better than he’s been running,” said the rider who won on Low Sun at Newmarket.

O’Brien failed to hit the Group One mark over the weekend, and US Navy Flag’s tilt at “The Everest” in Sydney on Saturday morning floundered on soft ground as the July Cup winner was unplaced behind Redzel.

Less than half an hour later though – and almost 900km away – O’Brien’s Yucatan put in a spectacular Group Two winning display that has already seen him described as”‘the Melbourne Cup winner in waiting”.

Not surprisingly that claim wasn’t made by the Irishman but by Nick Williams whose father, Lloyd, now owns the ex-Flaxman colt.

In his first Australian outing Yucatan won the Herbert Power Stakes with ridiculous ease under local rider James McDonald. He is now one of the 10-1 favourites for the race that famously stops a nation next month.

Whether Yucatan runs before that in next week’s Caulfield Cup has to be decided, but Nick Williams wasn’t alone in pondering if this is the year O’Brien finally lands Australia’s most famous race.

“I think he’s the Melbourne Cup winner in waiting. I think the way he won there, he’s only got to get a run,” said Williams, whose father won a sixth Melbourne Cup last year with Joseph O’Brien’s Rekindling. “It was a very arrogant win, as impressive a win in a proper race you’ll ever see.”

The Melbourne Cup is a rare blank on O’Brien’s big-race CV. He first tried with Yeats in 2006, finished third a year later with Mahler, and was runner up to his son last November with Johannes Vermeer.

The Group One campaign now points to this Saturday’s British Champions Day at Ascot. Ireland’s champion trainer is pondering taking a team that includes Happily in the QEII, Capri in the Champion Stakes and Hydrangea who may try to defend her Filly & Mare crown.

The Irish Leger hero Flag Of Honour could also be supplemented into the Long Distance Cup.

Looking further ahead, Too Darn Hot’s stunning Dewhurst Stakes performance represents quite a target for Ballydoyle’s 2019 classic aspirants to try and hit. But the opening maiden at Gowran on Monday underlines no shortage of ammunition.

O’Brien has declared seven regally bred colts with four by Galileo, two by his son Australia, and the newcomer Gentile Bellini by Dubawi out of the top class Sky Lantern.