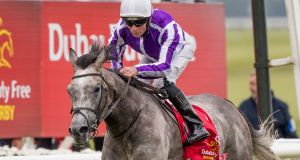 A greater stamina test will be ideal for Capri, last year’s St Leger and Irish Derby winner, who won on very testing ground at Naas in Spring. Photograph: Morgan Treacy/Inpho

The QIPCO Champion Stakes remains frustratingly elusive for Aidan O’Brien and Capri could have to get the better of John Gosden’s star colts Cracksman and Roaring Lion to fix that on Saturday.

The centrepiece of Ascot’s British Champions Day represents perhaps the most glaring gap on O’Brien’s otherwise overwhelming big race CV in these islands.

Even the Arc heroine Found proved unable to fill it, twice finishing runner-up, behind Fascinating Rock in 2015, and Almanzor a year later.

Another Ballydoyle stalwart, Highland Reel, was third in 2017 although nothing proved able to give Cracksman a race as he memorably galloped to championship honours by seven lengths.

With ground conditions forecast to be soft at best for British racing’s autumn showpiece event, Cracksman has been installed an evens favourite to double up on what could prove to be the final race of his career.

Very soft going may yet see his three year old stable companion Roaring Lion switch to the Queen Elizabeth II Stakes over a mile on the same card.

Gosden, who is all but assured of another British trainers’ crown with a lead of £1 million pound over O’Brien, is set to walk the Ascot track on Thursday to decide upon Roaring Lion’s target.

“He would be a very legitimate favourite for the Champion Stakes but wouldn’t want it very soft or heavy,” he said on Monday. “He’s got the class and speed to run over that mile if that were the case.”

In contrast a greater stamina test will be ideal for Capri, last year’s St Leger and Irish Derby winner, who won on very testing ground at Naas in Spring.

Injury problems led to him missing the summer but the grey stepped up on his comeback effort to finish fifth to Enable in the Arc at Longchamp earlier this month.

Capri is an 8-1 shot in some ante-post lists and is one of a handful O’Brien has left in the Champion Stakes. The Lockinge winner Rhododendron holds a QEII entry as well.

Hydrangea will attempt to record back-to-back wins in the Group One Filly & Mares while O’Brien has supplemented his Irish Leger-winner Flag Of Honour into the Group Two Long Distance Cup.

Hydrangea is one of eight Ballydoyle entries among the 14 left in the Filly & Mares but bookmakers appear to believe Gosden will hold a decisive edge over his Irish rival this weekend.

Gosden’s Lah Ti Dar is a 6-4 favourite for the fillies with her stable companion Coronet second best in the betting. Hydrangea is 8-1.

The Englishman’s dominant stayer Stradivarius is odds-on for the Long Distance Cup with Flag Of Honour second in the betting.

Ground conditions at Ascot were heavy in places on Monday and although there is a largely dry forecast for the rest of the week there is unlikely to be significant improvement in the going.

“I’d expect to see an improvement, given the forecast, but you don’t get much drying at this time of year,” reported clerk of the course Chris Stickels after more rain fell in 24 hours than in the whole of September. “We haven’t seen that volume, over 40mms, for ages.”

The prospect of testing ground has prompted Fozzy Stack to supplement Son Of Rest in the Group One Champion Sprint.

The Ayr Gold Cup winner will be up against last year’s winner Librisa Breeze and The Tin Man who scored in the race in 2016.

1 Eamon O’Shea: ‘We spent quite a bit of time talking about older people rather than to older people’
2 Love tears them apart in stunning Epsom Oaks romp
3 Monica Seles: The warrior queen who could have been the best ever
4 Sport crosses its fingers yet again as ministerial merry-go-round gets another spin
5 Valterri Bottas pips Lewis Hamilton to pole in Austria
Real news has value SUBSCRIBE

Love tears them apart in stunning Epsom Oaks romp 16:33
Valterri Bottas pips Lewis Hamilton to pole in Austria 15:43
Chris Martin steals a point for resurgent Derby against Forest 15:23
Brighton see off doomed Norwich to edge closer to survival 15:09
Eamon O’Shea: ‘We spent quite a bit of time talking about older people rather than to older people’ 08:00
Here is your handy guide to sport on television this week