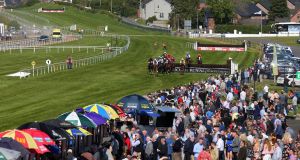 The lease for the current Down Royal racecourse finishes on December 31st. Photograph: Kelvin Boyes/Inpho

Horse Racing Ireland has described as premature any speculation about whether or not racing will take place at Down Royal in 2019.

The future of Irish racing’s reigning Racecourse of Year has been thrown into turmoil after the track’s current management team announced on Wednesday it will cease operations at the end of this year.

The Down Royal Corporation of Horse Breeders have been operating under a lease from Merrion Property Group which bought the site in 2005. The lease finishes on December 31st.

Jim Nicholson, chairman of the Horse Breeders body, said it is preparing to wind down its work and added it hopes to find a new site suitable for the track’s dozen fixtures next year.

“We are facing new opportunities and there is every likelihood that Down Royal will find a new home,” Nicholson stated.

However a spokesman for the Dublin based Merrion Group, and its owner, Mike Roden, responded by insisting that racing at the current site is very much in its plans.

“We have always stressed our determination to assume the day to day operational management of Down Royal, with horse racing at its centre.

“The withdrawal of the Down Royal Corporation of Horse Breeders from the Lands Tribunal process brings forward that outcome and we will continue our preparation to deliver horse racing from the beginning of 2019,” he said.

Ahead of Down Royal’s biggest fixture - the Grade One JNwine.com Champion Chase card on November 3rd - Horse Racing Ireland’s chief executive Brian Kavanagh has confirmed that racing’s ruling body will meet with the Merrion Property Group next week.

“We want to meet both parties to establish what is happening and what’s going to happen, and the nature of what arrangements are going to be reached in terms of transition, if there is to be a transition,” Kavanagh said.

Asked if the latest developments casts doubt on racing taking place at Down Royal in 2019, he said: “We need to establish that facts and the nature of any transition or change that’s going to take place so it is premature to say that.”

Down Royal is one of two tracks in the north of Ireland and although Irish racing is administered on an all-island basis, there are different funding arrangements in the North.

“It’s further complicated by how it is in Northern Ireland and not the Republic. There’s no Horse and Greyhound Fund. There’s a Northern Ireland racing fund which channels some money from betting shops back into racing. There’s no return from online or telephone betting in the north.

“The result is HRI has put in extra funding, as have the racecourses, with sponsorship and their own money to make prizemoney on a par with the rest of the country,” Kavanagh said.

He added: “Tracks have to be licensed each year by the Turf Club (Irish Horseracing Regulatory Board) and we (HRI) would have to be satisfied before providing fixtures that they would have the ability to run racing, both financially and other aspects to it.”

The IHRB’s chief executive Denis Egan confirmed any change in management at the track would require a new licence.

“If there’s a change in management or ownership at Down Royal racecourse, they would have to apply for a new licence - and that application would be considered on its merits by the licensing committee.

“Both parties have been in contact today and we will have to meet with them in the coming days,” he said.

Down Royal was given a dozen meetings when the 2019 fixture list was unveiled last month. It’s first scheduled card next year is for January 29th.