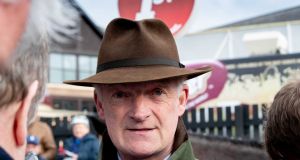 Willie Mullins is jump racing’s dominant figure but it is a double Cesarewitch assault on the flat this weekend which helps indicate the massive scale of the champion trainer’s resources.

Even on a weekend that sees Aidan O’Brien’s big race ambitions traverse the globe it is a remarkable display of sideline strength by someone whose primary focus is the National Hunt game.

Leg Spinner was the last Irish-trained winner of the English Cesarewitch in 2007 and his trainer Tony Martin tries again with Golden Spear in a historic marathon handicap with a prize-fund boosted to half a million pounds.

That kind of money has encouraged the Ballydoyle team to pitch their St Leger third Southern France into the race as well.

There’s no question though that Mullins provides the bulwark of the Irish challenge. He is 4-6 to win the race with one of his runner although it is Stratum who has been clear favourite for some time.

Robert Winston’s mount enjoyed no luck in the Ebor and has obvious credentials even if at over twice the odds his stable companion Uradel might provide more betting value.

Mullins has yet to win the Newmarket marathon but boasts a fine record in the Irish one which is once again run at Navan on Sunday.

Up to 40mm of forecast rain could dramatically alter the complexion of the €100,000 feature in terms of ground although whatever the circumstances Chelkar’s appearance will still be intriguing.

The ex-French runner got no luck in running on his first run for Mullins in the Ascot Stakes during the summer. His subsequent run at Galway can be ignored as he pulled a shoe and was found to be coughing afterwards.

The topweight Stellar Mass lining up keeps Chelkar at 9.7. It’s still a major impost on soft ground but hardly insurmountable for a horse originally bought with a Melbourne Cup tilt in mind.

Australia will be very much on O’Brien’s mind in the early hours of Saturday morning as US Navy Flag lines up for the $13 million “Everest” sprint in Sydney at 6.15 Irish time.

It is the second renewal of the world’s richest turf race and takes place 25 minutes before O’Brien’s 2017 Derby runner-up Cliffs of Moher takes his chance in the Group One Ladbrokes Stakes at the Caulfield track in Melbourne.

The Melbourne Cup entry Yucatan takes his chance in a mile and a half Group Two while a trio of sprinters – Fleet Review, Intelligence Cross and Spirit Of Valor – also line up on the same Caulfield card.

By the afternoon though a potentially seismic renewal of the Dewhurst Stakes will have eyes trained resolutely on Newmarket.

The seven furlong Group One has a peerless record in identifying future classic winners but it has rarely been as anticipated as this.

Too Darn Hot’s towering reputation contributed to his yearling half brother making 3.5 million guineas at the sales this week. Another unbeaten colt, Sangarius, is also regarded as a potential superstar.

The scale of their reputations means the sole proven Group One winner in the field, Advertise, is only fourth favourite.

Ballydoyle’s apparent number one hope, Anthony Van Dyck, has at least contested a top-flight race already and lost little in defeat behind Quorto in the National Stakes last month.

The benefit of that gritty experience could yet prove crucial if it comes down to a fight.

O’Brien has a dozen runners in total lined up to run at Newmarket on Saturday and with next year’s classics in mind there will be plenty interest in how the impressive Naas maiden winner Magna Grecia goes in the Group Three Autumn Stakes.

The champion flat trainer has 33 weekend starters in total with two of them going to Limerick on Saturday where the Listed Martin Molony Stakes is featured.

This mile and a half plus event could see The King encounter easy ground for the first time since he won his maiden in impressive style last year.