Too Darn Hot takes Dewhurst Stakes thanks to turbo-charged finish 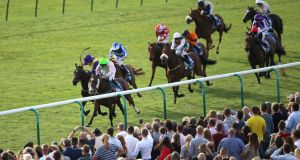 Low Sun saw off stablemate Uradel to provide Willie Mullins with a one-two in the Dubai £500,000 Cesarewitch Stakes at Newmarket.

As the field approached the final half-mile of the two-mile-two-furlong contest, the Ian Williams-trained Stars Over The Sea and Paul Nicholls’s Cliffs Of Dover led the 33 runners, but faded away as Low Sun and Seamie Heffernan hit the front.

Uradel was travelling noticeably well in behind in the hands of Billy Lee and the pair drew clear entering the final furlong.

Uradel did his best to get on terms, but with the rail to help, Low Sun dug deep to win the battle by a neck. Cleonte was third with Vis A Vis fourth.

“I wasn’t looking at the two of those in the last furlong, I was looking at what was going to pass the two of them. I was hoping one would hold on. I was just delighted nothing came from out the back.

“We had this race in mind when we saw the prize money. We’ve another seven in the Irish Cesarewitch tomorrow and they could have come over here.

“We brought our best ones here. Apart from it being an iconic race which is a delight to have on the CV, the prize money was good and we aimed what we could.

“That is probably his limit. I can’t see him producing another 10lb. I think we’ve squeezed everything we can out of him today. I don’t think he would get into a Melbourne Cup.

“We will try and keep him for those big handicaps. I don’t think he needs to go back over hurdles, I think we let him rest on his laurels.”

Too Darn Hot’s turbo kicked in late on as he ran out a dominant winner of the Darley Dewhurst Stakes.

The beautifully-bred son of Dubawi, out of the top-class racemare Dar Re Mi, looked every inch a superstar in the making after winning his first three starts, with successive victories at Sandown followed by an impressive triumph in the Champagne Stakes at Doncaster.

John Gosden’s youngster was an even-money favourite to maintain his unbeaten record on his Group One debut and ultimately got the job done in scintillating style.

Just for a moment Too Darn Hot looked in trouble in behind, with Frankie Dettori having to get to work with over two furlongs to run.

Advertise and Anthony Van Dyck moved on, but once in clear daylight, Too Darn Hot fairly rocketed home and Dettori was even able to salute the crowd as he passed the post with two and three-quarter lengths in hand.

Advertise was a clear second.

“He’s an amazing horse and in the end I was struggling to ease him down.

“He’s had three easy races and today he was getting knocked about and running in snatches. For a minute I thought I was in trouble and then the turbo kicked in.

“He’s up with the best I’ve ridden, he’s got a good cruising speed and he moves his legs really fast!

“He’s got pace, he’s bred to stay but I think the Guineas will be the next stop.”

Norway showed stamina will be his forte after staying on powerfully to give Aidan O’Brien back-to-back victories in the Godolphin Flying Start Zetland Stakes.

Having landed the 10-furlong prize 12 months ago with subsequent St Leger winner Kew Gardens, the Ballydoyle maestro repeated the trick with the full brother to 2013 Derby hero Ruler Of The World.

Despite being a bit green the 7-2 shot found plenty for pressure under Seamie Heffernan to defeat I’ll Have Another by a length.

Following the race the winner was cut to 25-1 for the Derby by Paddy Power and Betway, while Ladbrokes went 33-1 for the same race.

O’Brien said: “I’m delighted with him. That was a lovely experience for him. He stays well and the last day he won well and galloped to the line. He is a beautifully bred horse.

“It is possible [going to France for Criterium de Saint-Cloud]. He is a lovely big horse and he doesn’t have to go there as he has had that experience coming here. It’s a possibility though as he is in it.

“He is a lovely horse as he is a brother to Ruler Of The World and half brother to Duke Of Marmalade.”

Following successive wins at Chantilly in September, the Andre Fabre-trained Kingman colt was the 6-5 favourite to complete his hat-trick and enhance his growing reputation in this Group Three contest.

Massam took the eight-strong field along for much of the one-mile journey before Magna Grecia’s two stablemates Circus Maximus and Western Australia moved to the front in an attempt to raise the pace.

Persian King and Magna Grecia followed them through before drawing clear to fight it out racing inside the final furlong.

Both juveniles gave their all, but with the rail to help, it was Persian King who claimed a neck victory in the hands of Pierre-Charles Boudot with the pair three lengths clear.

India coach Ravi Shastri hails ‘one of the greatest series ever’ 14:45
Ireland midfielder Conor Hourihane set for Swansea loan spell 14:25
Richard Keogh has joined Huddersfield until the end of the season 13:25
Jordan Henderson takes up ambassadorial role in support of NHS 13:05
Mason Jones not interested in being the Welsh Conor McGregor 12:01