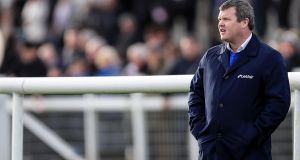 Gordon Elliott holds a lead of almost €400,00over Willie Mullins but only a fool would rule out his rival conjuring up a final-round knockout blow. Photograph: Donall Farmer/Inpho

By the time Anthony Joshua and Wladimir Kiltschko square off at Wembley Stadium in their world heavyweight title bout on Saturday the identity of Ireland’s champion National Hunt trainer will have been decided.

The scrap between the perennial champion Willie Mullins and the young pretender Gordon Elliott has been the prism through which much of the 2016-17 jumps campaign has been interpreted. Nothing’s going to change as the season finishes at this week’s Punchestown festival.

The first of five days worth almost €3 million in prize money begins on Tuesday and although Elliott holds a lead of almost €400,000 only a fool would rule out his rival conjuring up a final-round knockout blow.

Punchestown is famously Mullins’s happy hunting ground. Last year he won nearly a million in prize money during the festival, almost five times more than Elliott. Circumstances are different now, although not so much that either man has been willing to go that extra promotional mile.

A ‘morkoting’ whizz clearly feeling the boxing motif came up with the not-so-novel idea that Irish racing’s two very own heavyweights might line up in a boxing ring and ‘gurn’ on cue for the cameras.

It was never a runner. Conjecture makes it appealing to wonder what kind of trash talk Mullins and Elliott might privately utter about each other but neither is ever likely to abandon an instinct for public restraint in favour of rote showmanship.

The images might have worked though. Sporting head-to-heads thrive on opposites and on the surface Punchestown’s protagonists are very different.

It’s the smooth-talking champ, bred to the game, seemingly at ease in even the most pressurised situation, versus the rough-and-ready upstart, desperate for success and seemingly impatient with much of the PR-coated shinola which goes with being in the public eye.

Anyway, the ring idea didn’t fly. In fact it was emphatically shot down. But racing isn’t a natural fit for such bells and whistles anyway. It ultimately comes down to the horses and, perhaps most crucially of all, who owns them.

It’s why perhaps the most significant dig in the trainers battle hasn’t come from Mullins or Elliott but from the Ryanair boss Michael O’Leary.

He famously removed 60 horses from Mullins last September in a dispute over training fees. Those 60 were dispersed among a collection of trainers but the majority share wound up with Elliott. Having built up an early-season lead anyway, it provided an unmistakable momentum shift.

It’s a salutary reminder that behind any image the most important racing factor remains the same as it’s always been. There’s always a horse to buy. Finding the owner to buy it is the problem. And finding the owner with pockets deep enough to buy the best horses is key.

That’s why the job of racehorse trainer is a singular one. Every trainer admits the actual day-to-day task of getting an animal fit enough to win is relatively straightforward. It’s having to be salesman, talent-spotter, diplomat and logistician as well that makes it unique.

You can even argue the role’s sporting credentials. Horses and jockeys provide the athleticism after all, and over the years plenty of trainers have thrived on more flimflam than horsemanship. It certainly makes the public perception of two heavyweights getting into a ring seem straightforward.

That’s why the straight-forward head-to-head portrayal of the Mullins-Elliott battle will be such an easy-sell this week, especially since it’s equally easy to portray a vibrant National Hunt scene enjoying unprecedented levels of success.

It remains a racing curio that Ireland’s most important race-meeting takes place in Gloucestershire each March. So it seems logical that a record-breaking 19 winners at Cheltenham last month must denote a sport on the crest of a wave.

Burbling underneath the brochure image, however, is a day-to-day reality for the majority distorted by the impact of a select group of heavyweight owners and trainers.

Of the 19 Irish winners at Cheltenham, half a dozen each were trained by Mullins and Elliott. Three others went to Jessica Harrington. Michael O’Leary had four winners at Cheltenham and was heard to grumble because they weren’t in the top races. The weekend before Cheltenham he had all four runners in a Grade Three race at Naas. Last Monday he ran 13 horses in the Irish National.

It’s a concentration of power which the Irish Racehorse Trainers Association estimates leaves 85 per cent of its membership struggling to make a living. It has also provoked Horse Racing Ireland into making significant changes to next season’s programme book to try to provide more opportunities for the squeezed middle.

However, it’s Elliott’s title challenge which makes at least some of those tales of professional woe best served with salt. Jump racing’s image of itself as a grassroots and egalitarian contrast to the flat is old hat now. But so too is any notion that it’s a resolutely closed shop.

Win or lose this week, Elliott’s ascent over the last decade is flesh and blood rebuff to that idea.

With no racing background, this 39-year-old mechanic’s son began training with just three horses in 2006. Within a year he’d won the Grand National. He hadn’t even had a winner in Ireland when Silver Birch won in Aintree. Now he’s on the verge of being top of the pile.

Mullins is an exceptional champion, notable for maintaining widespread popularity despite a decade of domination. And underneath the urbanity there’s a competitive zeal that will keep him scrapping all the way to Saturday evening.

Elliott possesses it too and if there’s a pugnacity to the challenger which suggests he mightn’t find the boxing ring too alien an environment, should his hand be held aloft on Saturday it will seal one of sport’s most remarkable success stories.