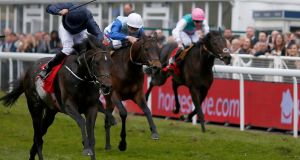 The final afternoon of the May Festival here saw another colt from Aidan O’Brien’s stable led back to the winner’s enclosure after a Derby trial, but Cliffs Of Moher’s victory in the Dee Stakes was not as routine as the bare facts might suggest. He crossed the line with a handy length-and-a-half to spare over Bay Of Poets, yet there were moments when he did not look likely to win his Classic trial, never mind the Derby itself.

Cliffs Of Moher briefly touched 9-4 in running on Betfair as Ryan Moore started to roust him along with some urgency with a quarter of a mile still to run and Max Zorin, a 25-1 shot, still travelling comfortably in a two-length lead.

Moore finally drove Cliffs Of Moher alongside the leader inside the final furlong and while the 4-5 favourite was in full command as he crossed the line, he will need to improve significantly on this performance to take a hand in the finish at Epsom.

“He’s going to come on an awful lot from that,” Kevin Buckley, the Coolmore Stud operation’s British spokesman, said afterwards. “He hasn’t run since October, and that was a big step up for him.

“He was slow out of the stalls and Ryan had to work on him around the track, but he learned a lot and he’s finished off his race nicely.

“Ryan was happy with him afterwards and said that he would improve a ton. We’ve got to see what happens at Lingfield tomorrow when we run Sir John Lavery down there, and we’ll probably have something [in the Dante Stakes] up at York as well, but I’d say that it’s highly likely that he will be Epsom-bound on that performance.”

Cliffs Of Moher was cut to as short as 4-1 for the Derby by one bookmaker, but William Hill still offer 7-1 and cut their price about the Sir Michael Stoute-trained Mirage Dancer, a son of Frankel who ran an eye-catching race to finish fourth behind Cliffs Of Moher, from 33-1 to 20-1.

O’Brien’s latest win in the Dee Stakes - his fourth in the last six years - strengthened his hand for Epsom without looking like an obvious trump card.

As a result, Churchill, O’Brien’s 2,000 Guineas winner, remains the ante-post favourite for the Derby at a top price of 11-2 almost by default, though few punters will risk a penny on Churchill before he is confirmed as a definite runner.

The suspicion remains that Coolmore would prefer to send Churchill to the St James’s Palace Stakes at Royal Ascot, for which he would be an obvious favourite, rather than risk a hard race in defeat at Epsom if his stamina does not extend to 12 furlongs.

Time is running out to find a team leader for the Derby in Churchill’s absence, however, and much may now depend on Sir John Lavery’s performance in Lingfield’s Derby Trial on Saturday.

US Army Ranger, last year’s Chester Vase winner and then the runner-up in the Derby, was the 2-1 favourite to give O’Brien a double in the Group Three Ormonde Stakes, but he was beaten in the final stride as Franke Dettori forced a reluctant Western Hymn to put his nose in front on the line.

Western Hymn had more than a length to find inside the final furlong and typically started to hang in behind the leader when he was asked for a finishing kick. Dettori tried again, though, and this time Western Hymn agreed to co-operate, getting up in the last stride to win by a short head in a gripping finish.

“He’s a very difficult horse,” Dettori said. “You can’t get there too early, I got there as late as I dared and he still stopped, but the line came in time for me.

“He’s quirky, but he’s part of the furniture in the [JOHN GOSDEN]stable, we all love him and he deserves a race like this. I enjoy riding him because it’s a challenge. He’s got all the ability, but he knows the game inside out and you have to try and find the key to get him to go. Today I managed to find it.”

2 Chelsea win at Liverpool to move into top four