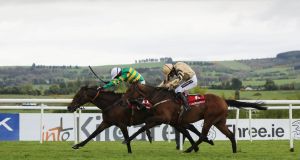 For a second day in a row the Willie Mullins-Ruby Walsh team emerged on the wrong side of a vintage finish to a Punchestown festival feature as their Cheltenham Stayers hero Nichols Canyon lost out to the English challenger Unowhatimeanharry on Thursday.

However despite that defeat in the Ladbrokes Stayers Hurdle – and Djakadam’s short head Gold Cup loss to Sizing John 24 hours previously – momentum in the all-consuming battle to be champion trainer still seems to have shifted significantly towards Mullins with only two days to go.

The remarkable strength in depth of the reigning title holder has rarely been more obvious as after the big race he saddled another JP McManus-owned star, Great Field, to win the Grade One Ryanair Novice Chase as part of a Day Three festival double.

A week that began with Mullins trailing Gordon Elliott by over €400,000 now sees the gap cut to just over €126,830 and, with five runners in Friday’s €250,000 feature alone, bookmakers now reckon Elliott is a much more shaky 4-6 favourite having started the week at 1-5.

“I’m not looking at gaps. I’m just trying to win races and have a good week,” Mullins said after Great Field’s victory although if the intention was to deflect attention it was futile, even if the man chasing ten titles in a row had been impressively stoic too after Nichols Canyon’s defeat.

“We’re just not getting the rub of the green but no matter, they’re running well and they’ve been great races,” he’d said.

Victory in the following two races however looked to make it ‘game on’ for a spectacular season finale against his great rival this weekend, something that might have contrasted to a premature sense of ‘game over’ had it been two narrow victories for Djakadam and Nichols Canyon instead.

Maybe it’s that nagging sense of what-if which had Mullins mulling over a potential nightmare scenario on Saturday. Inevitably quizzed about his improved title chances, he referred to the star performer removed from his care by Michael O’Leary last September and sent to Elliott.

“Apple’s Jade might put paid to that. But we’ll keep going until it’s over,” he said. “We’ve been hitting the crossbar but one or two are starting to go in now.”

Mullins’s capacity to hit a winning hot-streak is unrivalled and the man who saddled 22 winners over just four days last Christmas now has Ruby Walsh in winning form again after Asthuria led home a stable 1-2-3 in the mares novice hurdle.

It finally got Walsh off the mark for the week after a frustrating run of five Grade One seconds this week.

Earlier Nichols Canyon and Unowhatimeanharry had pulled 18 lengths clear and the 4-1 winner did here what he was widely anticipated to do at Cheltenham last month when managing only third to his Irish rival after starting an odds-on favourite.

“I haven’t been able to bring myself to watch the Cheltenham race again. I was so disappointed,” said Unowhatimeanharry’s trainer Harry Fry who later combined again with jockey Noel Fehily to win a handicap with Minella Awards.

“He didn’t run badly at Cheltenham but it didn’t happen on the day. On any day, on any racecourse there can be a different result,” he added.

The Mullins-Elliott battle has dominated much of this Punchestown but it is Jessica Harrington who is once again enjoying a profitable festival and she secured a double in the first two races to bring her tally for the week to four.

In-form jockey Robbie Power also hit four winners for the week when Bobabout came from what seemed a hopeless position in the handicap hurdle to beat Runyon Rattler by a nose.

It was Mark Walsh who did the steering on Don’t Touch It in the handicap chase and the former Grade One winner’s touch of class proved decisive.

“He’s a class horse and the stronger they go the better he goes because he’s well able to travel. But I got there a mile too soon and he was having a good luck around,” said Walsh.

A vintage day for owner JP McManus ended with a fourth success in the bumper as another cross-channel raider, Dead Right, scored under John Joe O’Neill, son of the legendary trainer and former champion jockey Jonjo O’Neill.

No one was happier on Thursday however than veteran jockey Barry Cash who steered Treo Eile to a 10-1 victory in the marathon La Touche Cup over the banks.