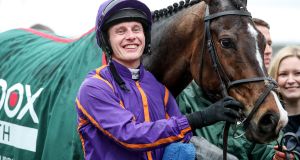 Friday’s Betdaq Punchestown Champion Hurdle could ultimately present Arctic Fire with a chance to step into the Grade One spotlight although first he looks set to play second fiddle in the attention-stakes to Labaik.

In fairness it will be the same for everything else too on the run-up to the €250,000 feature.

Probably depending on your financial stake in him, Labaik is either lovably quirky or a menace. But whether or not the Gordon Elliott-trained grey jumps off this time is certain to dominate all thoughts when the field lines up at 5.30.

Labaik disgraced himself by ‘planting’ at the start on Tuesday and the sight of him sauntering around to technically qualify as a runner was farcical enough to prompt the Turf Club into promising a review of the rules surrounding such incidents.

Davy Russell has been given the task of persuading Labaik to properly exhibit his talent but even if he does jump off in his first-time visor it really will be ‘senior hurling’ now that he’s out of the novice ranks and pitched against properly seasoned top-flight operators.

They include Petit Mouchoir, the veteran My Tent Or Yours, who joins his younger stable companion Brain Power in the race, and last year’s winner Vroum Vroum Mag who leads a team of five for Willie Mullins.

She’s Ruby Walsh’s pick leaving Paul Townend to again team up with Arctic Fire who tries to go one better than his second to Faugheen in this race two years ago.

That was just one of a series of placed efforts behind his outstanding stable companions, Faugheen and Hurricane Fly, which reduced Arctic Fire to a comparative ‘extra’ role although he did finally acquire a Grade One himself in the 2015 Hatton’s Grace.

And it seemed a case out of sight out of mind for many when Arctic Fire returned from 14 months on the sidelines in last month’s County Hurdle at Cheltenham. Yet despite topweight all the old quality looked intact as Townend brought him through to win one of the season’s most competitive handicaps with a remarkable weight-carrying performance.

Mullins’s expectations that he would prove little more than a “social runner” were confounded and Arctic Fire returns to top-flight action as the freshest horse in the race and officially joint top-rated with My Tent Or Yours.

Almost inevitably the focus will be elsewhere, even to his absent stable companion, the in-foal  Annie Power, who could have run her last race after confirmation she won’t appear at the festival.

However for a horse capable of mixing it meaningfully with Faugheen and ‘The Fly’ in their pomp, this looks to represent a good opportunity for Arctic Fire.

Friday’s other Grade One is the Tattersalls Champion Novice Hurdle which sees the hugely exciting English raider Finian’s Oscar line up after an impressive top-flight success at Aintree.

His appearance looks significant in itself since trainer Colin Tizzard appeared keen to let the horse off for the summer after that Liverpool effort less than three weeks ago.

Having missed Cheltenham though that busy schedule may not be as significant a consideration for a race in which the home principals have plenty to prove.

Death Duty flopped at Cheltenham while Bacardys was pulled up in the Neptune and his stable companion Let’s Dance subsequently got upstaged by Augusta Kate at Fairyhouse. Considering the Tizzard team’s red-hot form, Finian’s Oscar should prove tough to beat.

On the Fringe has a remarkable sixth festival hunters chase victory in his sights while Joseph O’Brien hopes Slowmotion can continue her progress through the chasing ranks when she lines up in the mares handicap.

His father’s Friday focus will be on Sandown though where Ryan Moore will team up with Cougar Mountain in the Group Two Mile and also the US Grade One winner Deauville who lines up in the Group Three Gordon Richards Stakes.