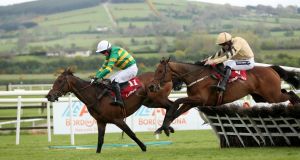 Unowhatimeanharry just held off Nichols Canyon in a thrilling finish to the Ladbrokes Champion Stayers Hurdle at Punchestown.

Sent off favourite for the equivalent race at the Cheltenham Festival, the nine-year-old had lost his long unbeaten record since joining Harry Fry when only third behind Nichols Canyon.

Nichols Canyon was favourite to confirm the form and provide Willie Mullins with some much-needed prize-money in his attempt to chase down Gordon Elliott, and at the top of the home straight Ruby Walsh appeared to have everything covered.

Noel Fehily had kicked on some way out on Unowhatimeanharry (4-1) and stole a few lengths, but Walsh still looked confident on jumping the last a length down.

However, while he was edging closer with every stride, the post appeared just in time to give Fry one of the biggest wins of his career.

“What a fantastic race, Nichols Canyon pushed us all the way,” said Fry.

“Obviously Cheltenham wasn’t our day but it’s great to bounce back in a brilliant race like this.

“He travelled really well and Noel was brilliant on him, knew when to press the button and kept enough up his sleeve.”

Lil Rockerfeller adopted his usual front-running tactics under new jockey Richard Johnson, but he was a spent force with three furlongs to run this time after his heroic effort saw him finish second at Cheltenham.

When Fehily kicked clear, Daryl Jacob on Footpad and Walsh were the two main dangers but Footpad appeared to fail to see out the trip.

A head separated the big two at the line with a further 18 lengths back to Footpad.

Unfortunately the promising Sutton Place was pulled up sharply by Mark Walsh half a mile out.

Fehily said: “I just thought we went very slow. Plans A, B and C went out of the window because the last thing I wanted was to be in front two out.

“I had to go forward but luckily he’s a tough little horse, he was very long at the last but he came up for me and he’s got the heart of a lion.”

Minella Awards provided Fehily and Fry with a quick double in the Shamrock Enterprises Handicap Hurdle as Minella Awards came with a late run to deny Philip Hobbs’s No Comment in a finish dominated by the British raiders.

No Comment had beaten Minella Awards at Plumpton in January, but when it mattered most the Fry runner was once again primed to run for his life.

Having performed well at Cheltenham and Aintree No Comment finally looked like getting a big win but Minella Awards, winner of the EBF Final at Sandown last time out, quickened up better.

The pair were sent off 7-1 joint-favourites and were separated by a length. Willie Mullins’s Screaming Rose picked up place money in third.

Fehily said: “I had a lovely spin around, I just missed the carnage early and after that it was straightforward.

“I’ve said it before, but what a trainer Harry Fry is at producing them on the big day.

“When this fella was beaten by the second at Plumpton he kept telling he wasn’t right and that in the spring he would improve – he was right.”

Fry said: “This makes up for yesterday when Drumcliff was brought down early.

“Today has been a different story and what a 40 minutes.

“We just felt this lad would come to himself in the spring and I’m pleased for his owners, who are very patient.

“Noel was brilliant again, he’s a huge part of our success.”

Treo Eile, second in the opening race of the meeting on Tuesday, caused an upset in the La Touche Cup when touching off Cantlow.

The race changed in complexion just before the runners joined the racecourse proper when Mtada Supreme, who was still travelling well, went through the wing of a hurdle.

First Lieutenant briefly threatened to play a hand in the finish but he faded away into third.

“In all fairness to Shay they weren’t going to run him but he said they might as well as they’d get more money here just by getting placed than winning a point-to-point,” said Cash.

Slevin said: “I thought we were running for place money. I’m delighted and couldn’t believe it. I thought the ground was too quick as well, but I was wrong.

“I worked with Barry in Aidan O’Brien’s, it must be 25 years ago. You can’t beat experience. You need experience out there as there is a lot of jumping and twisting and turning.”

Harrington and Robbie Power teamed up for more success with Bobabout in the opening JLT Handicap Hurdle at Punchestown.

Fresh from their win in the feature Punchestown Gold Cup with Sizing John and with the Irish National victory of Our Duke still fresh in the mind, this came at a lower level.

The winner faced a wall of horses turning into the straight, but picked up well to claim Runyon Rattler in a photo finish to reward Harrington’s growing army of followers at 8-1.

Neil Mulholland’s Pinkie Brown ran well to finish third. The winner had undergone an unusual prep having only run on the Flat at Navan on Sunday.

“That’s just one of those races when you know that things are going your way,” said Power.

“I was brought to a standstill at the fourth-last and I actually considered pulling up, I thought I had no chance.

“I thought I’d hack home, creep around the inside and the more I passed the more he came alive until going to the last I thought I would win.

“Taking the hood off today has made a difference.

“Jessie’s horses are in flying form, all credit to her team.”

Harrington said: “These distances are getting shorter and shorter. We went from a head to a short-head yesterday to a nose today. It’s not good for the nerves.

“That was the most amazing run because he was virtually brought down at the fourth-last and Robert said it crossed his mind to pull him up.

“He loved that ground and today was the first day he really jumped. During the winter he couldn’t jump off the heavy ground.

“He had a little blow out on Sunday on the Flat. Again he was very keen on Sunday. He’s probably better when they go a really good gallop and he does settle. He’ll learn to settle in time.”

Don’t Touch It had finished eight lengths behind Hurricane Ben at Fairyhouse yet was 8lb better off this time and cruised to the front at the second last.

Hurricane Ben attempted to make all but was a sitting duck as Mark Walsh sent the 5-1 chance into the lead, although Caolaneoin and Neverushacon, a stablemate of the winner, made him pull out all the stops

“I was there a mile too soon. Even with the cheekpieces he was still having a look at the crowd and pricked his ears,” said Walsh.

“Luckily the others challenged me in plenty of time and he stuck his head down.

“Mrs Harrington’s horses are in flying form and it’s a joy to ride them.

“He won a Grade One here last year and good ground is a big help to him.”

Harrington said: “The horses are just in good form. They just all seem to be coming together at the right time.

“I thought he was unlucky in Fairyhouse, he just couldn’t quite get to him. He’s got a lot of class, but he’s definitely a bit of a Scorpion. Mark said he nearly got him beaten by going to the front too soon.

“He just cruised there but when he gets to the front he thinks it’s great fun and ‘I’m here why should I go any quicker’.

“I put cheekpieces on for the first time as Barry (Geraghty) said in Fairyhouse to put them on him.”

She added: “I have a great team behind me and I’m very lucky to have them.

“We’ve got up to a bit of a high peak. The only way is down and it’s usually very quickly down!”

Paul Kerrigan calls it a day after 13 years with the Cork footballers 14:27
Diego Maradona buried as world mourns flawed soccer great 09:17
Neil Lennon insists he is the man to turn it around for Celtic 08:58
Billy Burns named at 10 to face Georgia; Errors cost Dundalk against Rapid Vienna 08:00
Andy Farrell looking forward to some selection headaches come the Six Nations 06:00