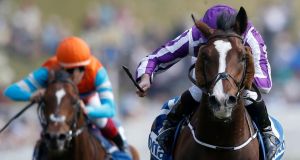 Aidan O’Brien saddled the first three home as Venice Beach gave him an eighth triumph in the MBNA Chester Vase.

The O’Brien team dominated the Group Three contest from the start, with The Anvil soon in front once Ryan Moore reined in Venice Beach after having been the best away.

The Anvil upped the tempo with four furlongs left but Venice Beach (5-2 favourite) was up for the challenge, galloping on resolutely to stake his claim for the Investec Derby.

Stablemate Wings Of Eagle stuck on stoutly and was length and a quarter away in second, with The Anvil only a nose behind in third to complete a clean sweep for the Ballydoyle stable.

Moore said: “I thought it was a very good performance from a lightly-raced colt. We are still learning an awful lot about him.”

“He picked up and he won his race. He’s still learning about it and it’s still early days for him.

“He’s a beautiful pedigree and he has a good brain.

“I don’t know what the plans are but he’s certainly a colt with plenty of potential.”

“We knew that he stays a mile and a half. He’s a little bit lazy and a little bit babyish, that’s why we felt it would be important to bring him here.

“He’s a good bit to learn, but Ryan was very happy with him.

“You learn a lot at this place – a lot of stuff happens very quickly. You have to make room, it can be tight and you have to stay as well.

“The lads will talk about that [the Derby] and decide what they want to do in the next week or 10 days.

“He’s a horse that gets a mile and a half and handles quick ground and we think he’ll improve.”

Of runner-up Wings Of Eagles, O’Brien said: “I’m delighted with him as well. We liked him last year and he had a lovely run in France – he was back a bit [ninth in the Criterium de Saint-Cloud] but it was a lovely run.

“If he was going to be ready for the Derby, he needed to run and he travelled well and settled well.”