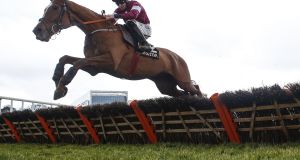 The Ballymore Novices Hurdle is favourite to be Samcro’s Cheltenham festival target next month.

The hugely exciting novice made it three from three over jumps with an impressive first Grade One victory in Sunday’s Deloitte Hurdle at Leopardstown.

Samcro was subsequently made odds-on to win at next month’s festival.

Although successful at the minimum two-mile trip over the weekend, it is the two-mile, five-furlong Ballymore which looks like being his next target.

“We will keep our options open but the Ballymore is favourite,” said Eddie O’Leary of Gigginstown Stud on Monday.

O’Leary added he was surprised at the speed Samcro showed on Sunday and said: “He’s not a two-mile horse. He’s a three-miler. So to show that over two miles, if he stays right, he’ll be nice.”

Samcro, who is generally odds-on for the Ballymore, has been raised just 2lb in official handicap ratings for his easy 5½-length defeat of Duc Des Genievres.

That puts him in the top 10 of Ireland’s hurdlers, just 8lb behind Faugheen who remains top rated on 167 despite his defeat by Supasundae at the weekend.

Sunday’s Unibet Irish Gold Cup winner Edwulf has been raised 12lb to a mark of 164.

Joseph O’Brien’s star completed a miraculous return to winning form at Leopardstown and has emerged in good shape after his 33-1 victory.

It was a fairytale result considering Edwulf almost lost his life at last year’s Cheltenham festival after suffering an oxygen deficit which led to him collapsing after the last in the four-mile National Hunt Chase.

“There was never a plan. We were just going to see how he was all along but there was no plan to do anything with him,” O’Brien said on Monday.

“Even when he came back into training it wasn’t a certainty he was going to even run again. It was literally just step by step all the way and he kept ticking the boxes. All his work was good, he was in great form so we had no reason not to run him.

“It would have been a shame to have him stood in a field for the rest of his life when he could have been doing what he loves to do,” he added.

In other news, Willie Mullins’s Bleu Et Rouge is the sole Irish hope remaining in Saturday’s Betfair Hurdle at Newbury after the five-day stage.

Mullins’s jockey Paul Townend got good news when x-rays indicated he didn’t fracture his ankle in a fall from Killultagh Vic at the final fence of Sunday’s Irish Gold Cup.

He will, however, have an MRI scan later this week before getting an all-clear to return to action.