Faugheen beaten once again at Leopardstown 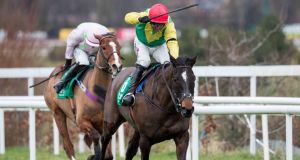 Jessica Harrington’s Supasundae produced a Saturday surprise to overturn Faugheen in the Day One feature of the new Dublin Racing Festival at Leopardstown.

Concentration on Irish racing’s new initiative may have had to compete with stories about television pictures rights, and who gets to broadcast them, but it didn’t interfere with old-fashioned footfall through the gates.

Expectations for the Saturday attendance were exceeded with Leopardstown officials reporting a crowd of 14,105. Full capacity is 18,000.

In the circumstances a successful return to form by Faugheen after his inexplicable Christmas flop might have been a perfect result for those promoting Irish jump racing’s inaugural €1.5 million showcase event. However Supasundae upset the storyline.

The 8-1 shot harried the 9-10 favourite for much of the race as Faugheen cut out an ordinary pace which had the field bunching up on the run to the second last.

That was when Faugheen had to be pulled up at Christmas, the reason for which has never been uncovered. And when Paul Townend conjured a superb leap at the penultimate flight the stage was set for Faugheen to reassert his status as Ireland’s top hurdler.

That it didn’t happen is likely to provoke even more speculation about the 2015 Champion Hurdle winner’s state of health on the run in to Cheltenham next month.

The immediate reality though is that Faugheen didn’t have enough to repel a horse warming up for a Stayers Hurdle tilt and who had never previously won at Grade One level.

Faugheen in his pomp won the 2016 Irish Champion Hurdle by 15 lengths: this time he jumped the last alongside Supasundae but couldn’t repel his rival and went down by over two lengths.

Willie Mullins saddled four winners overall on the card, including a Grade One success for Footpad in the Ward Solicitors Arkle. It meant a cut of almost €250,000 on his rival for the trainer’s championship, Gordon Elliott, who drew a blank.

But Mullins’s dominance of the first Dublin Racing Festival couldn’t extend to the feature event and Faugheen left the trainer scratching his head.

“I was disappointed with him. He’s sort of half back on track. He’ll have to improve a lot to get back to what he was,” conceded Mullins initially.

Later he added: “I hope he can come back. At least the graph is going up. I’m just hoping spring ground and weather will help him. He needs to recapture his spark.”

Bookmaker reaction was to stretch Faugheen out to 6-1 for next month’s Champion Hurdle and make the English title holder Buveur d’Air, who had won earlier in the day at Sandown, an even hotter 2-5 favourite.

Faugheen’s owner Rich Ricci added: “At least it was better than the last day. Paul said he never really picked up the way he can. When he winged the second last you hoped he would move on but he didn’t.

“We’ll just have to keep carrying on. We’ll continue to Cheltenham. There’s nothing else to . I hope there is one more big day in him.”

However on a significant day Jessica Harrington secured yet another significant big race victory in the colours of Supasundae’s late owners, Ann and Alan Potts, who both passed away in 2017.

Sizing John’s superb Gold Cup hat-trick made him last season’s Horse of the Year and his Cheltenham victory in particular meant Supasundade invariably played second-fiddle to his stable companion.

Despite that, he recorded his own Cheltenham festival success in the Coral Cup last March and a return to the Cotswolds for the Stayers Hurdle has been his plan all season.

Harrington wrong-footed quite a few with her decision to go there via this two-mile Irish Champion Hurdle. But once again Ireland’s current Sportswoman of the Year successfully confounded expectations.

“I thought if Faugheen is back to his best he’ll win, but our horse could outstay everything else,” she said afterwards, conceding she largely looked at the €150,000 highlight as a “nice little trial.”

Harrington added: “He’s never jumped as well before and was always travelling. I thought they’d go too quick for him over two. Robert (Power) was sure when he had Faugheen in his sights at the last he would stay every rich of the way.

“He’s only in the three mile hurdle at Cheltenham so that’s where he’ll be going. He’s much better on better ground. I came here to give him a prep and to win this is some prep!”

She didn’t completely rule out the possibility of Supasundae being supplemented into the Champion Hurdle but stressed: “Okay he has beaten the best here but is he going to beat Buveur d’Air who looks very smart. And we know he stays three miles. It’s just really sad Ann and Alan aren’t here to see the fruits of what they started.”

Our Duke is set to start favourite and the trainer said: “The pressure is back on tomorrow. This glory doesn’t last very long. Our Duke is in great form and win or lose I hope he runs his race.”

Earlier, Footpad earned some odds-on quotes for the Arkle at Cheltenham with a silky smooth defeat of Petit Mouchoir in the Irish version.

“He jumps like a stag; you’d swear he’s jumping fences all his life. It was a great thrill, deadly!” said his jockey Paul Townend. “I thought it was a really good performance and he did it the hard way, making all his own running.”

Min bounced back from losing a Christmas Grade One in the stewards room here with success in the Cork Dublin Chase. His stable companion Yorkhill proved hugely disappointing, finishing only sixth.

After Yorkhill’s eclipse, and Douvan far from certain to make Cheltenham, Min is as low as 3-1 to give Mullins a first success in the Queen Mother Champion Chase next month.

“They went very fast and David (Mullins) elected to settle him in and it made a huge difference. I’d imagine the Champion Chase is where we will go now,” said the champion trainer.

“I was very disappointed with Yorkhill and Paul (Townend) said he was never travelling. It’s completely back to the drawing board with him. We’ll see if anything shows up but possibly the fast pace over jumps caused him to lose his jumping method down the back. He wasn’t happy going at pace over fences,” he added.

Rachael Blackmore guided Patricks Park to success in the Sandyford Handicap Chase while the 11-4 favourite Blackbow pricked some major reputations with his victory in the Grade Two Goffs Bumper.

“He was very good, travelled sweetly and improved hugely from his last run. I imagine all roads lead across (to Cheltenham’s Champion Bumper,)” Mullins said.

Earlier jockey JJ Slevin rode his first Grade One winner when guiding the 25-1 shot Tower Bridge edged out Jetz in a close finish for the Lacy Solicitors Hurdle.

“It’s great to get the chance to ride these horse. Joseph clearly knows what he’s doing!” Slevin said.

Tower Bridge’s owner JP McManus also landed the Coral Handicap Hurdle with the bottomweight Off You Go who started at 6-1 and beat the Mullins hope Deal D’Estruval.