Irish racing set to be broadcast on Racing UK from 2019 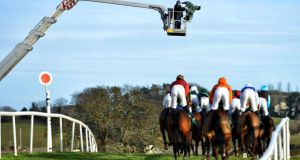 A rebranding of the Racing UK product is anticipated to reflect the addition of Irish racing. Photograph: Russell Pritchard/Inpho

Irish racing is set for a broadcasting shake-up in 2019 with pictures switching to the Racing UK channel from At The Races (ATR).

It is anticipated a general meeting of the Association of Irish Racecourses next week will approve the switch as Satellite Information Services (SIS) – the company which holds the broadcast rights to all of Ireland’s 26 racecourses – intends winding up its ATR deal when it finishes at the end of this year.

A rebranding of the Racing UK product is anticipated to reflect the addition of Irish racing which up to now has been available free as part of the Sky TV package.

RUK is a subscription channel, although on Friday one AIR director, who preferred to remain unnamed, downplayed any potential impact on racing’s customer base here and on levels of coverage.

“We’re aware anyone with a bog-standard Sky package gets ATR as part of it. But there seems to have been a suggestion that ATR intend to rebrand themselves and bring it into a subscription category. So a free-to-air scenario essentially wasn’t going to be there anyway,” he said.

“There will be a rebranding. It’s won’t be just Racing UK with Irish racing. It will be something like Racing UK and Ireland, to reflect the addition of racing here,” he added.

SIS has the rights to Irish racing until the end of 2023 and although ATR has a veto on any new deal it’s believed its board will recommend the new deal to its members next week. It is also understood that Horse Racing Ireland’s media rights committee has approved it.

However HRI’s chief executive, Brian Kavanagh, declined to comment on the matter and said: “This is in a process and it wouldn’t be appropriate for me to say anything until the process is completed.”

Separately on Friday, Kavanagh welcomed HRI’s new three-year deal with RTÉ which will see between 25 and 27 days of live racing on the State broadcaster.

It includes an extra day’s racing from the Fairyhouse Easter festival this year and the Winter Festival Grade One card at that track in December. In 2019 and 2020, there will be additional broadcasts of Gowran’s Thyestes fixture and at the redeveloped Curragh.