Faugheen returns to action after Christmas blip, and Samcro will try to justify the hype 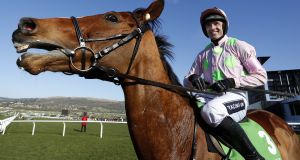 Ruby Walsh on Faugheen: If the old Faugheen shows up at Leopardstown this weekend, it will be a gift from the punting gods. Photograph: Alan Crowhurst/Getty Images

Putting all of Leopardstown’s eggs into the Dublin Racing Festival basket is put to the test this weekend.

The decision to try and replicate Irish Champions Weekend on the flat means the feature races from Leopardstown’s previous three best standalone fixtures are concentrated into 24 hours over Saturday and Sunday.

With new races thrown in too, and prizemoney boosted to €1.5 million, the result is seven Grade One contests, three Grade Twos, a couple of six-figure handicaps, and a trio of “mere” 75-grand races that would ordinarily be centre stage.

It’s a move that follows the trend of concentrating resources into profile-promoting showcase events, and there’s a lot riding on it.

Such a concentration inevitably left January’s action looking a little threadbare, and the idea that this weekend’s action will not be viewed through the prism of the ultimate showcase at Cheltenham next month is far-fetched.

Keeping powder dry for the Cotswolds also means both Road to Respect and 2017’s Horse of the Year Sizing John miss Sunday’s featured €200,000 Irish Gold Cup. That leaves the likely favourite, Our Duke, as the only one of Ireland’s top-five rated chasers to appear at the new festival.

Nevertheless, Faugheen’s intriguing appearance in Saturday’s BHP Irish Champion Hurdle, as well as Samcro’s eagerly anticipated return to action a day later, are the sprinkle of stardust on a very rich list of ingredients.

So, at the risk of over-egging the metaphor, there’s no excuse for it not to rise into a perfect soufflé of all that’s best in a sport experiencing unprecedented levels of international success and eager to extend its public appeal.

This will be Irish jump racing in its best bib and tucker and the public verdict will get parsed over for a lot longer than the 15 races take to run.

The most frustrating element to Faugheen’s shock Christmas defeat at the track is the lack of any sort of explanation as to how it happened.

Champion Hurdle winners rated alongside the absolute elite ever to race over flights are not supposed to get pulled up before the second last in races for which they start 2-11 favourite.

Six weeks of speculation as to the how and why it happened has been varied, occasionally fanciful, and ultimately futile. Faugheen was physically fine after the race and nothing medical has shown up in the aftermath. That leaves a dilemma.

If Christmas was a blip, and the old Faugheen shows up at Leopardstown, then a wonderful talent rated a stone clear of his opposition and available at a shade of odds against is a gift from the punting gods. But if Willie Mullins isn’t sure it was a one-off, how can anyone else be?

Faugheen’s stable companion Melon dons a first-time hood to try to settle him, while there are also plenty of question marks over the English hope, Defi Du Seuil.

However, if such queries aren’t answered, there could be some each-way value opting for the Mullins third-string Bapaume who travelled notably well to the closing stages of a three-mile event at Christmas.

There’s nothing each-way about the hype surrounding Samcro who lines up for Sunday’s Deloitte Novice Hurdle.

With no less than Davy Russell calling him “as good a horse as we’ll ever see”, even the idea of a youngster with two runs over hurdles under his belt taking on Faugheen & co didn’t seem too far-fetched earlier in the week.

Samcro is back to the minimum trip after his last run in November over two and a half. He initially looked set to appear in Saturday’s opener but now takes on 10 opponents including four from Willie Mullins.

If Samcro can’t beat these, then the hype machine can be switched off afterwards. But for now it’s still on full-blast for Michael O’Leary’s most exciting young prospect.

The Ryanair boss dominated the Christmas Chase when Road to Respect led home a Gigginstown clean sweep. His absence leaves Our Duke’s attempt to successfully return from a back problem the central narrative of the Unibet Irish Gold Cup.

If Jessica Harrington’s Irish National hero is impressive, he could jump over his stable companion Sizing John in the Cheltenham Gold Cup betting. If he isn’t, then Valseur Lido could be value to step up from his own comeback to action over Christmas.