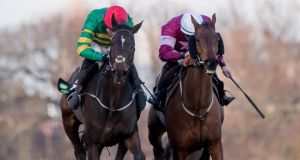 In what was a tremendous training performance – Edwulf nearly died at last season’s Cheltenham Festival – O’Brien has somehow managed to coax him back to his best.

There were plenty of thrills and spills during the race, with Killultagh Vic jumping the last in front only to sprawl on landing.

Anibale Fly also took a crashing fall, while Our Vic seemed to be back-peddling when he made a mistake second-last. Valseur Lido never threatened, either.

Djakadam was prominent throughout but gave best on the run to the last where Outlander took over.

The Leopardstown specialist Outlander looked sure to add another Grade One but amateur jockey Derek O’Connor had other ideas as 33-1 chance Edwulf got on top close home and won by a neck.

Djakadam ended up finishing third, another 10 lengths away.

“It’s a credit to everyone involved – the staff at home, the vets at Cheltenham last year and JP [McManus, owner] and Frank Berry [racing manager] who gave him all the time in the world.

“It’s been a long road to get him back from where he was at Cheltenham when we thought he was gone.

“Derek is an unbelievable horseman. Horses just jump unbelievably well for him and he gets on great with this fella. We’re over the moon.

“We’ll see how he comes out of this first and we’ll think about Cheltenham then.

“It’s not too often you get a horse good enough to run in the Gold Cup so if he’s well, I’d imagine he might go there.”