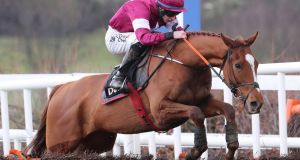 Samcro stylishly maintained his 100 per cent record in the Grade One Deloitte Novice Hurdle at Leopardstown on Sunday.

Gordon Elliott’s great white hope was sent off the 4-6 favourite, despite dropping back down to two miles, but the result was never in doubt.

There was no great pace early doors as Patrick Mullins went to the front on Real Steel, but the likes of Paloma Blue and Sharjah were pulling hard.

Plenty still held a chance as the big field turned into the straight, but young jockey Jack Kennedy looked to have everything covered on the hot favourite.

Paloma Blue escaped from the pack and gave Samcro something to chase but Elliott’s inmate showed plenty of gears and easily went clear by five and a half lengths.

The inexperienced Duc Des Genievres stayed on nicely to claim second for Willie Mullins, with Paloma Blue holding on for third.

Elliott said: “The horse was great. I’m delighted with him and Jack gave him a great ride.

“He’s opened up a lot of doors and I’d say we can go any road with him now. He’s a good horse and we’re lucky to have him.

“Nothing fazes him at all. He just does what he has to do – eats, sleeps and drinks. He was never out of his comfort zone – a bit like myself.

“He was bought to be a big three-mile chaser, and that’s what he is, but, to be honest, he showed a lot of class there and he could be anything.

“I don’t know where we’ll go at Cheltenham, I’ll have to ask the boys and see.

“Coming here I would have said we’d be going for the Ballymore but the way he done that, I’d say he could go for any race.”

Kennedy said: “He couldn’t do any more. He jumped great and travelled well.

“It doesn’t really matter what you do with him. He’s a dream to ride. He settles away and he’s always there whenever you want him.

“He’s a pleasure to ride. All going well, we’ll try and get to Cheltenham in one piece and look forward to it.”

Samcro’s owner Michaael O’Leary said: “He ran well, jumped well and will come on for the run.

“He got a lovely ride from Jack. I’m bricking myself every time he runs that he’ll take a fall or something will happen.

“But it’s nice to have one as good as him. We’ll have to keep the hype down now.”

Elliott added: “I wouldn’t rule out the Supreme after that but I’ll chat with the lads and see.

“I don’t know where we’ll go, to tell you the truth, but I would be frightened by Getabird [in the Supreme].

“I thought he was very good and think he’s a good horse.”

Mullins was thrilled with the performance of the Duc Des Genievres and said: “I’m delighted with that. For a horse having only his third run of his life that was a big run.”

Stepped up to Grade One company after winning at the Christmas meeting at this track, Paul Townend was content to sit off the pace.

The outsider Tenth Amendment set only a steady tempo and that was to the detriment of the 4-5 favourite, Espoir D’Allen, who raced very keenly in the hands of Barry Geraghty.

Farclas, behind Espoir D’Allen on his hurdling debut, loomed up turning in but Townend was still happy to bide his time until asking for everything after the last.

The 3-1 chance, trained by Joe Murphy on the level, pulled a length and a quarter clear and is now available at around the 8-1 mark about winning the Triumph Hurdle at the Cheltenham Festival.

Townend said: “We went a fair gallop and although he’s inexperienced he’s tough, and when his jumping warmed up he was brilliant.

“We really didn’t hang around so he had to be brave at the last, and from there to the line.”

Mullins said: “It was a fantastic ride by Paul. We didn’t think there’d be much pace in the race and he dropped him in lovely at the back of the field and there was actually a lot more pace than we anticipated.

“Paul was a little bit worried if he was travelling but didn’t want to give him a squeeze and light him up too early.

“He held, what he thought, was a bit in hand turning in and met the last spot-on. They [Mr Adjudicator and Farclas] are two good battlers and two good horses.

“He’ll run in the Triumph Hurdle next and then possibly on to the French version later on.”

Elliott was pleased with the performance of Farclas and said: “It was a grand run and he’s a horse for next year.”

Geraghty, however, had no explanation for Espoir D’Allen’s run.

He said: “It’s disappointing, but there is no obvious reason. He was a bit free but I wouldn’t blame that.”

Sent off at 4-1 in the colours of champion chaser Special Tiara, favourite-backers never had much to worry about.

British challenger Lady Buttons travelled strongly into contention down the back straight and was in front turning for home, but Robbie Power always exuded confidence about Alletrix.

She survived a scruffy leap at the last to beat Barra by seven and a half lengths, with Contingency and Lady Buttons third and fourth respectively.

Harrington said: “I suppose the handicapper was right.

“She was in here and when I saw she got 125 for her next handicap this was such a big pot and there is not a lot of her so the light weight helped.

“The bit of rain that fell (on Saturday night) helped also and she jumped like a buck, except at the last.

“She is learning and is not going near Cheltenham but will go for a mares’ hurdle at Limerick and then the mares’ race at the Fairyhouse Easter Festival.”

The good thing of the meeting obliged as Total Recall won the William Fry Handicap Hurdle.

Despite a huge field, Willie Mullins’s charge was sent off the 5-6 favourite, having won the Ladbrokes Trophy over fences last time out.

Running off a mark some 31lb lover over hurdles than his chase rating, many expected him to win – but not much went right during the race.

He was ultra-keen on the way round for Townend, lost a shoe, and also had to make his own running for much of the race.

Despite using so much energy, Total Recall was still able to pull away after the last and beat Oscar Knight by three lengths.

Mullins said: “He was too keen and we didn’t expect that.

“We were going to drop him in the middle of them and hunt away and try and win it over the last two hurdles but the horse took control after three or four hurdles and that was it.

“Total Recall did it very well in the end.”

Townend said: “He pulled hard but I never thought we’d go that slow.

“I was hopeful and he looked well in off his chase mark, so it’s nice when it works out as it doesn’t always.”

Monalee put in a sparkling display of jumping to win the Flogas Novice Chase.

Henry de Bromhead’s 11-4 joint-favourite had fallen on his previous outing over Christmas but met nearly every fence on a perfect stride.

Given a bold ride by Noel Fehily, there were plenty in with chances approaching the last but not Sutton Place, who made a bad mistake down the back straight and was pulled up.

Monalee was almost joined at the last by Invitation Only, but Monalee’s proven stamina came to the fore and he eventually ran out a determined three-quarters-of-a-length winner.

Al Boum Photo made late gains to claim second ahead of Invitation Only.