In the previous race, Min took the Dublin Chase to avenge his Christmas defeat 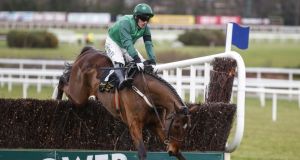 Footpad made every yard of the running to come home an impressive winner of the Frank Ward Solicitors Arkle Novice Chase at Leopardstown.

Paul Townend was positive from flag-fall aboard the 4-9 favourite and only main market rival Petit Mouchoir opted to go with him, as he set a strong pace up front in the two-mile-one-furlong Grade One contest.

Petit Mouchoir, who was returning from 108 days off the track, was noticeably on his toes before the race and clattered the second fence before eventually settling on Footpad’s heels as the other three runners toiled some way behind.

With two to jump, Townend turned up the pace on Footpad and while he clipped the final obstacle, the Willie Mullins-trained victor never looked in danger as Petit Mouchoir ploughed on for second with Any Second Now third.

Paddy Power make Footpad the 10-11 favourite for the Arkle Trophy at next month’s Cheltenham Festival.

Mullins admitted it had not been the plan to make all, but felt his charge had posted a fine effort.

He said: “He did it the hard way and jumped well in front. I think he pecked a bit at the last, but it was a very good performance.

“We didn’t set out to make it, but Paul wasn’t happy there was enough pace so he went on.

“We are heading for the Arkle unless something else changes.”

He added: “Footpad was fourth in a Champion Hurdle, but we thought he would be going two and a half miles or more over fences. The first day he jumped he was very good and when you can jump, you can go any trip.”

Townend said: “We didn’t hang around and kept it up. He jumped super and came up for me at the last when he was very long and got to the other side. He jumps like a stag, you’d swear he’s (been) jumping fences all his life. It was a great thrill riding him, he was deadly!

“I thought it was a really good performance and he did it the hard way, making all his own running.”

Mullins also saddled Demi Sang, who crashed into the first fence and eventually came home last of the four finishers.

He said: “Demi Sang made a hash of the first fence and lost his confidence a bit, so David (Mullins) tried to get him back jumping and he did.

“It would be hard to see him competing at Grade One level over two miles, so he’ll probably have to drop down a grade or go out in trip. I would prefer to go out in trip, but we’ll have a word with Frank (Berry) and JP (McManus) and see what they want to do.”

He said: “We were a bit disappointed because at the start of the season we thought we had the best, but it seems there’s one better than us.

“He made two early mistakes and that put manners on him.”

Meanwhile, Min bounced back to form and avenged his Christmas defeat as he won the Coral Dublin Chase.

Willie Mullins’ seven-year-old was first past the post in a Grade One over the festive period, only to lose the race in the stewards’ room to the reopposing Simply Ned.

However, he roared back into form with a clear-cut victory in the hands of David Mullins, after last year’s Champion Chase victor Special Tiara had made a bold bid from the front.

Special Tiara had upwards of 12 lengths in hand at one point, but was clearly coming to the end of his tether as Min reeled him in before jumping the final fence.

Ordinary World and Simply Ned tried to go with Min’s challenge, but the 11-8 favourite was far too good, with Ordinary World crashing through the last to give up his place chances.

David Mullins said: “Special Tiara went a right good gallop and it kept the race simple as there were a lot of horses there that could be free, but they settled going that gallop.

“He was too free here the last day and didn’t quite get home and I had that in the back of my mind. After I gave him a squeeze after the last he really picked up and I had Ordinary World covered.”

Min’s owner Rich Ricci was delighted his runner had regained the winning thread.

He said: “It was great, it was relief and he looked better today than at Christmas. Everyone tells me he jumped well today.

“It puts him back on track for Cheltenham, and starts a big weekend here in Dublin for us.”

Willie Mullins was also relieved to see Min back on song, but admitted plans for Yorkhill have been thrown back up in the air.

He said: “They went very fast and David elected to settle him (Min) in and it made a huge difference. We changed our tactics a bit and it worked well.

“I’d imagine the Champion Chase is where he will go now, and we don’t have anything else in mind.

“I was very disappointed with Yorkhill and Paul (Townend) said he was never travelling.

“It’s completely back to the drawing board with him. We’ll see if anything shows up, but possibly the fast pace over jumps caused him to lose his jumping method down the back. He wasn’t happy going at pace over fences.”

Mullins also has another string to his potential Betway Queen Mother Champion Chase bow in Douvan, who has been sidelined since last year’s Cheltenham Festival.

The trainer added: “Douvan is in good order and did some nice work during the week. Everything we are doing and asking him to do he is answering the questions properly, but we have a good bit to go yet.”

Patricks Park was delivered with a perfectly-timed run by Rachael Blackmore to win the Coral Sandyford Handicap Chase.

Formerly trained in Britain by Matt Shepherd, Patricks Park had his first start for Willie Mullins on New Year’s Day and stepped up considerably on that sixth place over hurdles to lift this two-mile-one-furlong contest.

Three Stars appeared to have stolen a winning advantage coming to the final obstacle but a slight mistake at that fence allowed Patricks Park (6-1) to get on terms and he kicked away after the last.

Tully East kept on for third with Blast Of Koeman fourth.

Off You Go triumphed from the bottom of the handicap in the Coral Hurdle.

Trained by Charles Byrnes and ridden by Mark Enright, Off You Go ran out a 13-length winner at Limerick over the Christmas period to book his place in the line-up for this 100,000 euro event.

Enright’s mount was sent off a 6-1 shot and jumped the last in front, only for Katie Walsh and Deal D’Estruval to set out in pursuit.

However, Off You Go still had a bit in reserve and he pushed on again to win, with Grand Partner third and the runner-up’s stablemate Makitorix fourth.

Blackmore said: “Patricks Park was fantastic. It was great to get an opportunity to get to ride for Willie and I was delighted I could get the job done today.

“We went a hell of a gallop so he was a little on his head at the start, but his jumping kept him in it and he was fantastic in that sense.”

In the opening race of the day, Tower Bridge swooped late to win the Nathaniel Lacy & Partners Solicitors Novice Hurdle.

The Joseph O’Brien-trained runner was the outsider of the seven-strong field and J J Slevin had him switched off at the back of the pack as Paul Townend set out to make all on 7-4 favourite Fabulous Saga.

The latter had built up a substantial lead and was still five lengths clear with three to jump, but Dicey O’Reilly was leading the chase and Fabulous Saga was clearly out of gas coming to the last.

It looked as though Jetz had stolen the advantage up the inside, but Slevin delivered the 25-1 winner down the middle of the track on the run to the line and Tower Bridge kept responding, eventually shading it on the line.