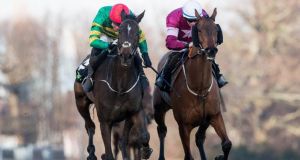 Edwulf, the horse that all but came back from the dead, put his stamp on the inaugural Dublin Racing Festival with a hugely emotional 33-1 victory in Sunday’s Leopardstown feature.

Two days of Irish jump racing’s finest competing for €1.5 million of prize money produced better-than-anticipated crowd figures, the promise of a new superstar for the sport in Samcro and, to cap it all, a feel-good climax to tug at the heartstrings.

Even JP McManus, the legendary owner who has seen most of what this most unpredictable of sports can throw up, was almost lost for words when Edwulf produced a fairy-tale result in the most festival’s most valuable race, the €200,000 Unibet Irish Gold Cup.

It’s less than a year since Edwulf lay on the ground at Cheltenham having collapsed after the final fence of the four-mile National Hunt Chase.

With screens around him it looked ominous for a long time but mercifully it was eventually established he had suffered oxygen deficit. He was moved to a nearby equine hospital and later returned to Ireland to recuperate at McManus’s Martinstown Stud.

“We just wanted to save him for a happy retirement,” McManus said. “That day at Cheltenham was about saving the horse’s life and it was a huge team effort. It wasn’t about coming back and winning grade-one races, so I’m lost for words.”

Edwulf did return to Joseph O’Brien’s yard and the young training maestro nursed the horse back to action. Edwulf was pulled up in the big Christmas Chase here but six weeks later, sharper and fitter, he produced a superb performance under the veteran amateur champion Derek O’Connor.

The partnership crept into contention and Killultagh Vic’s final-fence fall left it between Edwulf and Outlander up the straight with McManus’s third-string for the race beating Michael O’Leary’s number-one hope.

It was a first top-flight prize over fences for the record-breaking point-to-point jockey and a similar first over the big obstacles for O’Brien.

It completed a long-price grade-one festival double for O’Brien who won Saturday’s opener for McManus with the 25-1 Tower Bridge.

“It’s a been a long road to get him back from where he was at Cheltenham when we thought he was gone,” said O’Brien, who memorably won the Melbourne Cup on the flat in November. “We’ll see how he comes out of this and then think about Cheltenham.”

Edwulf is 25-1 to return to the scene of his darkest hour and win the Cheltenham Gold Cup in March. Since he has already produced something of a miracle few will dismiss his chance.

“I’m exceptionally happy for the horse. I never had a horse do what he did. He ran himself into the ground for me at Cheltenham and we thought his career was over,” O’Connor said.

The focus was resolutely forward-looking for much of the rest of Sunday’s action and Samcro in particular had everyone speculating about the heights he could reach after a first grade-one success in the Deloitte Novice Hurdle.

Gigginstown’s hugely exciting and unbeaten youngster landed 4-6 odds in style, took the drop back to two miles in his stride and is as low as 1-2 with some firms to win at Cheltenham.

“We can go any road with him now. He was bought to be a big three-mile chaser and that’s what he is. But he showed a lot of class there and he could be anything,” said Samcro’s trainer, Gordon Elliott.

It was Elliott’s rival Willie Mullins who was crowned the festival-leading trainer with seven winners over the two days including Mr Adjudicator’s Tatts Spring Juvenile Hurdle victory.

He goes for the Triumph Hurdle at Cheltenham, while the Aintree National remains high in Total Recall’s agenda after making the most of an advantageous handicap mark in the three-mile handicap hurdle.

The 16-1 second-string Relegate completed a Mullins hat-trick in the bumper at 16-1 and after significantly narrowing the gap to Elliott in the trainers championship he was cut to 11-10 to retain his title.

Monalee bounced back from a horror fall during Christmas to win a tight finish for the grade-one Flogas Novice Chase with predictions he could improve again for Cheltenham’s RSA.

There were similarly positive predictions for the future of the new festival and JP McManus praised the concept.

“Full marks to Leopardstown because these are bigger crowds than I’ve seen for these meetings before,” he said.

Sunday’s attendance of 12,031 was noticeably lower than Saturday’s 14,105, although the weekend total of 26,000 exceeded original predictions by Horse Racing Ireland.

The generally positive response to the initiative is likely to encourage plans to increase prize money for the Dublin Racing Festival to €2 million within two years.

“We set out to try and create a festival destination and thanks to the support of a lot of people I believe we have a very good start,” said Leopardstown’s chief executive, Pat Keogh.

“Five tracks were affected by the creation of this and it wouldn’t have happened without them. It’s much more than just about Leopardstown but it’s great for racing and it has delivered.

“Long-term I believe reaching €2 million in prize money is eminently achievable within two years. I would hope it will be up to €1.75 million next year,” he added.