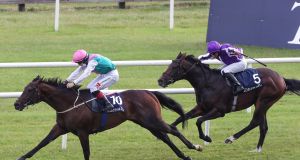 Aidan O’Brien could try and fill a rare Group One blank on his illustrious CV on Saturday with Lope Y Fernandez at Haydock.

The colt is one of 15 entries left in the Betfair Sprint Cup, a race that has proved notably elusive to Irish-trained horses over the years.

The success of Tom Hogan’s Gordon Lord Byron in 2013 is the only Irish victory in the race in almost half a century.

Haydock’s most prestigious flat race of the season is not a race traditionally targeted in strength by O’Brien, although Gustav Klimt ran third in it in 2018 behind The Tin Man.

The latter was also runner-up to Hello Youmzain a year ago and both horses are set to line up again on Saturday.

Lope Y Fernandez has been hitting the bar in Group One races this season, finishing third to Space Blues in the Prix Maurice de Gheest at Deauville on his last start.

Prior to that the son of Lope De Vega was runner-up to Pinatubo in the Jean Prat at Deauville. He began the season with an admirable third to Siskin in the Irish 2,000 Guineas over a mile.

Bookmaker reaction to Monday’s entry stage was to make Lope Y Fernandez a general 6-1 shot to score at the top-level for the first time in his career.

The other Irish entry, Aidan Fogarty’s Forever In Dreams, is among the outsiders.

In-form jockey Hollie Doyle has been booked to ride Glen Shiel in the big race. The Archie Watson-trained horse landed a Group Three at the Curragh on his previous start and is ready to take the step up to the top level. Glen Shiel will be Doyle’s first Group One ride in Britain.

Five of the last six winners in the Haydock contest have been three-year-olds but it is the July Cup winner Oxted, and the Hungerford Stakes victor, Dream Of Dreams, who top most betting lists.

In other news Enable is set to warm up for a potential fourth run in the Prix de l’Arc de Triomphe in Saturday’s Unibet September Stakes at Kempton.

The star mare won the race in 2018 en route to recording back-to-back Arc victories at Longchamp.

Enable is one of nine left in Saturday’s Group Three pot on the all-weather. The list also includes her St Leger winning stable companion Logician who hasn’t run in almost a year.

“They won’t run against each other,” said Teddy Grimthorpe, racing manager to the owner, Prince Khalid Abdullah.

“Enable is very much an intended runner at this stage. We entered Logician just in case, as he is nearing a return and we’re considering a couple of different options,” he added.

Enable is a 3-1 second favourite to win a third Arc in October with only Aidan O’Brien’s Love rated superior in the betting.