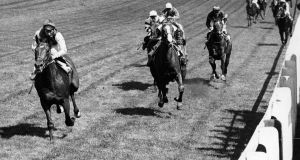 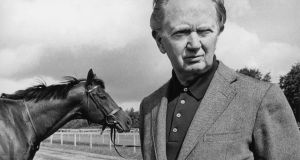 You don’t have to smell or touch to be in the presence of greatness, it can be witnessed and savoured from afar; and, in the year of 1970, as weeks and months rolled together, the deeds of Nijinsky proved ever more fantastical, a powerful colt - standing 16-3, a tad taller than the “finest horse” of Christy Moore’s “Ride On” lyrics - who with each stride left its imprint on flat-racing’s finest courses.

From the Curragh to Newmarket, from Epsom to Ascot and Doncaster, whether with Lester Piggott, more often than not, or Liam Ward, in the saddle, the Vincent O’Brien-trained horse ran with grace and blinding speed unmatched by any other and, for an eight-year-old like myself, the air of invincibility and of greatness about Nijinsky proved captivating.

Unfortunately, I never got to see Nijinksy in the flesh, reliant at the time on the grainy black-and-white television images to witness the great deeds and on the voices of Peter O’Sullevan and Michael O’Hehir who, in their own ways, who added to the horse’s aura as it claimed one race after another.

At family gatherings, all talk seemed to be of Nijinksy. Two of my uncles operated the photo finish unit at Irish racetracks and my dad moonlighted with them away from his day job, so it wasn’t unusual to be drawn in as an extended part of the deal, giant-sized binoculars wrapped around the skinny neck of my scrawny body with the old Phoenix Park racecourse the most favoured personal venue.

Indeed, my captivation of Nijinksy’s exploits that year would inspire all sorts of notions. For a number of years after it even involved cycling out from Edenmore to Mrs Flanagan’s riding stables located at the back of the Grand Hotel in Malahide where, after a lesson, for a few hours of mucking out you’d be rewarded with extra time riding out.

And, then, there was the letter of application in my teenage years to join the racing apprentice centre in Kildare. “What’s this?” my dad had asked, before doing what he considered his parental duty of tearing up the letter in front of my eyes to put an immediate end to any such ideas.

Nijinksy was a wonder horse, named after the great Russian ballet dancer Vaslav Nijinksy who, on his deathbed, made the promise that he would return one day, reincarnated as a horse. The Canadian-bred horse - out of Northern Dancer and Flaming Page - was bought by American industrialist Charles Engelhard on the recommendation of Vincent O’Brien and was named by Enghelhard’s wife, Jane. So it was that it ran in the green, yellow and red silks of their Cragwood Stables in South Carolina.

But it was to O’Brien’s Ballydoyle stables in Co Tipperary that the colt was sent, where as a two-year-old he went unbeaten in four races in Ireland - all at the Curragh - and made his first overseas trip, winning the Dewhurst Stakes at Newmarket, establishing himself as the leading horse of its age. It would be the next year, though, in 1970, when Nijinksy set himself apart not just from his own generation but of many others through thoroughbred history.

The horse had a physical presence, its bay colouring accentuated by three white feet and a near-perfect white heart on its brow. “He wouldn’t talk to me, he never talked to me. Nijinsky had that far-off look in his eye from the first time I saw him, it was like he was looking right through you,” said Piggott.

Nijinsky’s first run as a three-year-old came in the Gladness Stakes at the Curragh where Ward piloted him to an easy victory. “All you had to do was point him in the general direction,” was how Ward would describe the task of riding the horse. It was a mere taster of what would come, as race-by-race Nijinksy’s stature as a king of horses grew and grew.

One race followed another, all with similar outcomes. Nijinsky - a red-hot 4/7 favourite - won the 2,000 Guineas at Newmarket with Piggott doing the steering home, while his victory in the Epsom Derby saw Nijinksy record the fastest finishing time in over 60 years. What was only publically revealed some time afterwards was that the horse had suffered from a bout of colic in the days running up to the race.

Next up, Nijinsky, with Ward back in the saddle, added the Irish Derby at the Curragh to his roll of honour. The winning streak was then extended to include beating older horses in the King George VI and Queen Elizabeth Stakes at Ascot. O’Sullevan’s commentary of the race - still to be found on YouTube - only served to emphasis the ease of Nijinksy’s win. “He’s just letting him canter, what a horse he is . . . he’s trotted up,” said O’Sullevan.

Nijinsky returned to Ballydoyle with O’Brien’s plan being to rest the horse before travelling to France for the Prix de l’Arc de Triomphe at Longchamps in October. But the best-laid plans and all of that conspired against the trainer.

Nijinsky caught a virulent bout of ringworm (which resulted in the horse losing a substantial amount of its hair), recovery aided by a clever diet of raw eggs and Guinness and curtailed training; while another complication was presented when the horse’s owner insisted it be entered in the St Leger at Doncaster to see if he could complete the English Triple Crown, a feat last achieved by Bahram in 1935. The owner had his way, Nijinsky ran and won . . . but, in the process, it had suffered a weight loss of 29lbs, just four weeks before heading to Longchamps.

Sunday, October 4th 1970. My young sporting mind had two objectives that day: one minor, one major. The first was to watch some part of a soccer cup match at the top of the road where the word on the street was that the St Malachy’s goalkeeper was even more cat-like than Peter Bonetti. But there was a cut-off point in my viewing, to race home - using my hand as an imaginary whip on my own butt - to get to see the all-conquering Nijinsky claim another great prize.

I learnt a lesson that day, nothing can ever be taken for granted. Piggott kept Nijinsky to the back of the field. Going to the top of the hill, O’Sullevan’s commentary has only three horses in the 15 horse field behind Nijinsky. At the bottom of the hill, the same. Then, on the home straight, Nijinsky came up on the outside and picked off one horse after another. Until there were two. Nijinsky and Sassafras. Neck and neck. “It’s a photo finish . . . it’s a photo finish,” said O’Sullevan.

Except, I knew. Nijinksy had lost, his invincibility undone. And my eight-year-old self burst into tears, uncontrollable warm and salty tears; my utter disappointment providing also the first realisation of how important sport can be to our lives.