St Leger meeting at Doncaster will be pilot event for the return of crowds as 20,000 people will attend over its four days 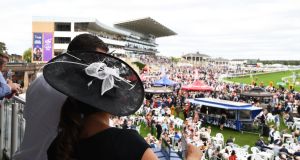 Spectators are to be allowed back on to a British racecourse in a fortnight’s time, ending a six-month barren spell that began in the week after the Cheltenham festival.

As expected the St Leger meeting at Doncaster is to lead the way, with more than 20,000 people allowed to attend over its four days from September 9th as a pilot event for the return of crowds.

Warwick and Newmarket have been cleared to allow some limited attendance later in the month.

Racing in Britain has been taking place behind closed doors since June, but the lack of atmosphere and crowd response has somewhat undermined the impact of major races, including the first four classics of the year. The St Leger will be the first top-class flat race to benefit from enthusiasts in the stand when the favourite, Santiago, lines up against Pyledriver, Hukum and others on September 12th.

“We are pleased to receive confirmation of our pilot events to welcome back crowds to racecourses,” said David Armstrong, chief executive of the Racecourse Association, who thanked the UK’s Department for Digital, Culture, Media and Sport “for entrusting the sport with this responsibility”.

Racing is hoping for a return of limited crowds at all tracks from October 1st, provided the pilot events work well, with social distancing, one-way systems and other measures in place to minimise the risk of viral transmission.

“Racecourses have been working for some time to this end, and we are confident the events selected will provide strong case studies which will be of use to all,” said Mr Armstrong. “The disappointment of postponing our last confirmed pilot at Goodwood was felt across the sport, but the learnings and behind-the-scenes work have been of great value to others. Racing is ready to proceed in a safe manner, and we are looking forward to once again welcoming crowds back to the racecourse.”

Doncaster said it would admit 3,640 spectators on the Wednesday of the Leger meeting, rising to 6,202 for each of the following three days. Tickets, which can only be purchased in advance, will be sold for a variety of enclosures and price levels, with officials saying a code of conduct would be published for attendees.

Staff at all tracks will be hoping the experiment can be proved a success and that crowd numbers can be increased in the near future following the significant damage done to the sport’s finances since the spring.

Arc, the group that owns Doncaster, said last week it would have to restructure its organisation, and one report said significant redundancies were being planned.

“Welcoming a crowd is absolutely fundamental to our business, as well as being the heart and soul of the spectacle,” said Mark Spincer, managing director of Arc’s racing division. “The team at Doncaster have worked incredibly hard on making sure that we have all of the steps in place to welcome a limited number of spectators in a safe and efficient manner.

“The event is, of course, a pilot so the experience may be different than customers may have got used to in previous years, but we are putting everything into making sure that our customers can have an enjoyable afternoon’s racing as well as offering valuable feedback.”

A jump racing fixture at Warwick on September 21st will be the next pilot event, with a crowd of 1,250 expected to set a template for smaller courses to follow.

A crowd figure has yet to be agreed for the three-day Cambridgeshire meeting at Newmarket later that week, the Jockey Club hoping to confirm details in the coming days after discussions with local authorities. – Guardian